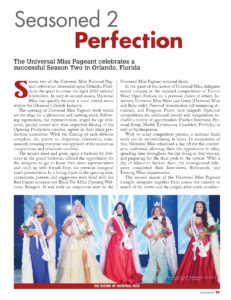 Season two of the Universal Miss National Pageant celebration descended upon Orlando, Florida in the quest to crown the eight 2022 national titleholders. In only its second season, Universal Miss has quickly become a must attend event within the Glamour Lifestyle Industry.

The opening of Universal Miss Pageant week would set the stage for a glamorous and exciting week. Following registration, the representatives, staged by age divisions, quickly moved into their respective filming of the Opening Production number, replete in their black production ensembles. With the filming of each division complete, the parent or chaperone orientation commenced, ensuring everyone was apprised of the numerous competitions and schedules involved.

The annual meet and greet, again scheduled by divisions in the grand ballroom, offered the opportunity for the delegates to get to know their sister representatives and catch up with friends from the previous inaugural year’s presentation. In a fitting finale to the opening date, contestants, parents, and supporters were feted with the Red Carpet entrance and Black Tie Affair Opening Welcome Banquet. It was truly an auspicious start to the Universal Miss Pageant national finals.

In the quest of the crowns of Universal Miss, delegates would compete in the required competitions of Formal Wear, Open Fashion (in a personal choice of attire), Interview, Universal Miss Meet and Greet (Universal Miss and Baby only), Personal Introduction (all remaining divisions), and Program Photo (not judged). Optional competitions for additional awards and recognitions included a variety of opportunities: Practice Interview, Personal Essay, Model, Entertainer, Headshot, Portfolio, as well as Spokesperson.

With so many competitors present, a national finals week can be overwhelming at times. In recognition of this, Universal Miss scheduled a day off for the contestants, mid-week, allowing them the opportunity to relax, spending time throughout the day doing as they wanted, and preparing for the final push to the crowns. With a day of relaxation behind them, the reinvigorated delegates completed their Interviews, Rehearsals, and Evening Wear requirements.

To read the rest of the Universal Miss feature… Click Here