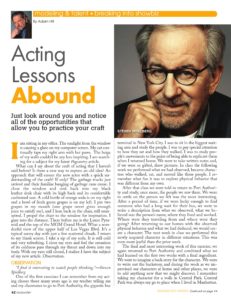 I am sitting in my office. The sunlight from the window is causing a glare on my computer screen. My cat con­tinually taps my right arm with her paws. The beige of my walls couldn’t be any less inspiring. I am search­ing for a subject for my latest Pageantry article.

What can I say about the craft of acting that I haven’t said before? Is there a new way to express an old idea? An approach that will ensure the new actor with a quick understanding of the craft? If only? The garbage trucks just arrived and their familiar banging of garbage cans ensue. I close the window and sink back into my black leather desk chair with its high back and its comfortable cushioned seat. A cold bottle of orange soda is on my right and a bowl of fresh green grapes is on my left. I put two grapes in my mouth (one grape never gives enough juice to satisfy me), and I lean back in the chair, still unin­spired. I propel the chair to the window for inspiration. I gaze into the distance. There before me is the Luxor Pyra­mid and the top of the MGM Grand Hotel. What a wonderful view of the upper half of Las Vegas Blvd. It ‘s a typical sunny day with just a few scattered clouds. I return to my blank screen. I take a sip of my soda. It is still cold and very refreshing. I close my eyes and feel the sensation of its coldness pass through my throat and down into my body. With my eyes still closed, I realize I have the subject of my new article. Observation.

“I find it interesting to watch people thinking.” ~Steven Spielberg

One of the first exercises I can remember from my act­ing classes those many years ago is my teacher telling me and my classmates to go to Port Authority, the gigantic bus terminal in New York City. I was to sit in the biggest wait­ing area and study the people. I was to pay special attention to how they sat and how they walked. I was to study peo­ple’s movements to the point of being able to replicate them when I returned home. We were to take written notes and, if we were so gifted, draw pictures. In class the following week we performed what we had observed, became charac­ters who walked, sat, and moved like these people. I re­member what fun it was to explore physical behavior that was different from my own.

After that class we were told to return to Port Authori­ty and study, once more, the people we saw there. We were to settle on the person we felt was the most interesting. After a period of time, if we were lucky enough to find someone who had a long wait for their bus, we were to write a description from what we observed, what we be­lieved was the person’s name, where they lived and worked. Where were they traveling from and where were they going? After returning to our homes with the observed physical behavior and what we had deduced, we would cre­ate a character. The next week in class we performed this newly acquired character in different situations. This was even more joyful than the prior week.

The final and most interesting week of this exercise, we again returned to Port Authority and combined what we had learned on the first two weeks with a final ingredient. We were to imagine a back story for the character. We were to write out the backstory, and during the week as we im­provised our characters at home and other places, we were to add anything new that we might discover. I remember taking my character for a walk in Central Park. Central Park was always my go to place when I lived in Manhattan. On that particular day, I acquired a greater appreciation for my park. With my newly learned skill of observation, I began to appreciate more thoroughly the Park I loved so much. I didn’t take the trees and bushes for granted, nor the giant rocks that made a hill to sit upon, where I could view people strolling the numerous paths or sunning themselves in the open fields, or even rowing on the lake. I lived in that newly discovered park, or I should say my recently devel­oped character did. That week in class I not only presented my character to the class, but I brought along with me a recreated Central Park. If this was acting, and I believe without question that indeed it was, then without question I had chosen the right profession. It was a glori­ous experience.

“Your job is to show the world what is beautiful and truthful about life.” ~Alec Baldwin

That class taught me that I did­n’t need an acting class to experi­ence observation. I could do this enjoyable work anywhere at any time. I didn’t need to be told that by exploring these different lives and making them my own, I would become a much richer actor. I confidently knew I would.

Now don’t think for a moment I am saying I didn’t need acting classes. I remained in classes for fifteen years, all the years I was a working professional. What I hope I’m making clear is that once I’d learned this exercise, I didn’t need a classroom in which to practice. Although, I must admit, the performer in me loved to show off the characters I’d discovered.