You’ve Got Some Nerves! 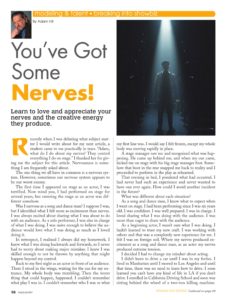 Recently when I was debating what subject matter I would write about for my next article, a student came to me practically in tears. “Adam, what do I do about my nerves? They control everything I do on stage.” I thanked her for giving me the subject for this article. Nervousness is something I am frequently asked about.

Was I nervous as a song and dance man? I suppose I was, but I identified what I felt more as excitement than nerves. I was always excited about sharing what I was about to do with an audience. As a solo performer, I was also in charge of what I was doing. I was naive enough to believe the audience would love what I was doing as much as I loved doing it.

In retrospect, I realized I always did my homework. I knew what I was doing backwards and forwards, so I never had to worry about making major mistakes. I knew I was skilled enough to not be thrown by anything that might happen beyond my control.

Back to my first night as an actor in front of an audience. There I stood in the wings, waiting for the cue for my entrance. My whole body was trembling. Then the worst thing that could happen, happened. I couldn’t remember what play I was in. I couldn’t remember who I was or what my first line was. I would say I felt frozen, except my whole body was moving rapidly in place.

A stage manager saw me and recognized what was happening. He came up behind me, and when my cue came, kicked me on stage with his big stage manager foot. Somehow that boot in the rear snapped me back to reality and I proceeded to perform in the play as rehearsed.

That evening in bed, I pondered what had occurred. I had never had such an experience and never wanted to have one ever again. How could I avoid another incident in the future?

What was different about each situation?

As a song and dance man, I knew what to expect when I went on stage. I had been performing since I was six years old. I was confident. I was well prepared. I was in charge. I loved sharing what I was doing with the audience. I was more than eager to share with the audience.

As a beginning actor, I wasn’t sure what I was doing. I hadn’t learned to trust my new craft. I was working with others and that was a completely new experience for me. I felt I was on foreign soil. Where my nerves produced excitement as a song and dance man, as an actor my nerves produced extreme tension.

I decided I had to change my mindset about acting.