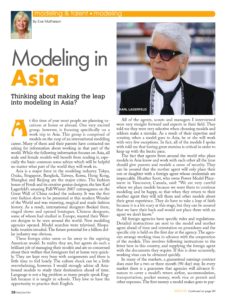 Thinking about making the leap into modeling in Asia?

At this time of year most people are planning vacations at home or abroad. One very excited group, however, is focusing specifically on a work trip to Asia. This group is comprised of models on the cusp of an international modeling career. Many of them and their parents have contacted me asking for information about working in that part of the world. While the following information focuses on Asia, all male and female models will benefit from reading it, especially the basic common sense advice which will be helpful no matter what part of the world they will work in.

Asia is a major force in the modeling industry. Tokyo, Osaka, Singapore, Bangkok, Taiwan, Korea, Hong Kong, Shanghai and Beijing are the major cities. The fashion house of Fendi and its creative genius designer, the late Karl Lagerfeld’s amazing Fall/Winter 2007 extravaganza on the Great Wall of China rocked the industry. It was the first ever fashion show to be presented at this modern Wonder of the World and was stunning, magical and made fashion history. As a result, international designers flocked there, staged shows and opened boutiques. Chinese designers, some of whom had studied in Europe, wanted their Western designs to be seen around the world. New modeling agencies opened. Model searches were televised. Shopaholic tourists invaded. The future potential for a billion dollar industry was obvious.

These foreign cities seem so far away to the aspiring American model. In reality they are, but agents do such a brilliant job of managing their models and are so concerned about their welfare that foreigners feel at home very quickly. They are kept very busy with assignments and there is little time to feel lonely. The culture shock can be a little overwhelming, however. I would strongly advise all Asia- bound models to study their destination ahead of time. Language is not a big problem as many people speak English because it is taught in schools. They love to have the opportunity to practice their English.

All of the agents, scouts and managers I interviewed were very straight forward and experts in their field. They told me they were very selective when choosing models and seldom make a mistake. As a result of their expertise and scrutiny, when a model goes to Asia, he or she will work with very few exceptions. In fact, all of the models I spoke with told me that having great stamina is critical in order to keep up with the hectic pace.

The fact that agents from around the world who place models in Asia know and work with each other all the time should give parents and models a sense of security. They can be assured that the mother agent will only place their son or daughter with a foreign agent whose credentials are impeccable. Heather Scott, who owns Power Model Placement in Vancouver, Canada, said: “We are very careful where we place models because we want them to continue modeling and be happy, so that when they return to their mother agent they will tell them and other models about their great experience. They do have to take a leap of faith because it is a bit scary at this stage, but they can be assured that we have their back and would not place them with an agent we don’t know.”

All foreign agencies have specific rules and regulations. Detailed instructions are sent to the model and mother agent ahead of time and orientation on procedures and the specific city is held on the first day at the agency. The agencies arrange working visas in advance with the cooperation of the models. This involves following instructions to the letter here in this country, and supplying the foreign agent with the documents they require. If this is done accurately, working visas can be obtained quickly.