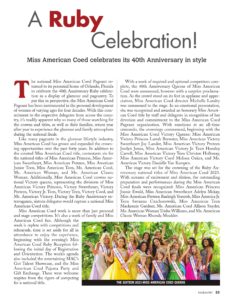 The national Miss American Coed Pageant returned to its perennial home of Orlando, Florida to celebrate the 40th Anniversary Ruby celebration in a display of glamour and pageantry. To put this in perspective, the Miss American Coed Pageant has been instrumental in the personal development of women of varying ages for four decades. With this commitment to the respective delegates from across the country, it’s readily apparent why so many of those searching for the crowns and titles, as well as their families, return year after year to experience the glamour and family atmosphere during the national finals.

Miss American Coed week is more than just personal and stage competitions. It’s also a week of family and Miss American Coed fun. Although the week is replete with competitions and rehearsals, time is set aside for all in attendance to enjoy the experience, beginning with the evening’s Miss American Coed Ruby Reception following the initial day of Registration and Orientation. The week’s agenda also included the entertaining MAC’s Got Talent Showcase, and the Miss American Coed Pajama Party and Gift Exchange. These were welcome respites from the rigors of competing for a national title.