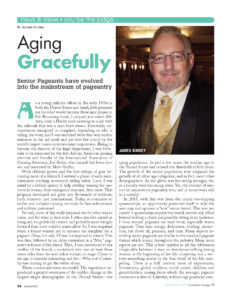 Senior Pageants have evolved into the mainstream of pageantry

As a young military officer in the early 1970s in both the United States and Israel, little prepared me for what would become those next phases in life. Returning home, I adopted and raised children, rode a Harley each morning to a job with the railroads that was a man-boy’s dream. Eventually, circumstances transpired or conspired, depending on who is telling the story, and I was recruited from that way-station existence in the rail yards and put into law school by the world’s largest casino entertainment corporation. Rising to become the director of the legal department, I was fortunate to be mentored by the first African American gaming attorney and founder of the International Association of Gaming Attorneys, Jim Butler, who himself had been chosen and mentored by Merv Griffin.

With children grown and the first whisps of grey becoming more of a blizzard, I entered a phase of early semi-retirement teaching motorcycle riding safety. Later, I was asked by a federal agency to help develop training for motorcycle trauma, then emergency response, then more. That program developed and grew into thousands of students, both domestic and international. Today, it continues to evolve and includes training curricula for law enforcement and military personnel.

Yet still, none of this really prepared me for what was to come, and for what is here now. I often describe myself as being not too politically correct, and probably more straight forward than most comfort zones allow. So, I was surprised when a friend wanted me to sponsor her daughter for a pageant. Okay, but only if I was not required to attend. This was then followed by an older contestant in a “Mrs.” pageant—a friend of the friend. Then, I was introduced to the mother of the friend, a contestant who was at least three times older than the next oldest woman on stage. Closer to my age, it sounded interesting and fun—Why not? Curiosity was starting to get the better of me.

Those contestants were successful. The experience engendered a greater awareness of the sudden change in the largest single demographic in the United States—the aging population. In just a few years, the median age in the United States had crossed the threshold of fifty years. The growth of the senior population now outpaced the growth of all other age categories, and in fact, most other demographics. As the globe was becoming younger, we, as a society were becoming older. Yet, the concept of seniors in mainstream pageantry was, and in many ways still is, a novelty.

In 2015, with feet wet from the initial toe-dipping sponsorships, an opportunity presented itself to take the next step and sponsor a “new” senior brand. This was not merely a sponsorship request but would involve real effort beyond writing a check and possibly sitting in an audience. I soon learned pageants are hard work, especially senior pageants. They take energy, dedication, funding, promotion, but above all, patience, and time. Many aspects involving senior pageants are similar to the standard pageant format which is seen throughout the industry. Many more aspects are not. This is best typified in all the differences imaginable between a teen or twenty-something young woman at the beginning of her life competing and a seventy-something senior in the final third of her life competing. There is a half century more of experiences, frustrations, global conflicts, social unrest, children and grandchildren raising from which the younger pageant contestant is free of. Likewise, without age produced complications, the director of a younger oriented pageant is freer to create the production masterpiece the public has come to expect from the industry.

The question of leadership itself is an issue. This question is not one of a good-business-person versus a not-so-good-business-person. It is a simple question of age. Senior pageants are usually created and run by one or more seniors. There are issues of finances and health often not present or not as prevalent among younger pageant contestants and directors.

So, in 2015, I found myself, a truly non-pageant person and a senior, becoming the director and owner of a senior pageant—Ms. Senior USA, and its eventual sequel, Ms. Senior Universe. Thanks in part to the casino entertainment industry, I was perhaps better prepared than at first believed, but only just a bit. Three needs were immediately identified—brand recognition, financial sustainability, and generational survivability.

Brand recognition refers to the ability of the public to identify a specific brand by its attributes. It is considered successful when people can recognize a brand through visual or auditory cues such as logos, slogans, packaging, colors, or jingles rather than being explicitly exposed to a company’s name. Brand recognition creates a symbiotic relationship with the public that is critical to financial sustainability. Most senior pageants tend to isolate and hold themselves out of the mainstream—both mainstream society and mainstream pageantry. For our first brand, Ms. Senior USA, we formed a team who chose deliberately to be “out there,” as in very public, and to not be shy about claiming equal space with the younger crowd in a way which is non-threatening and gives the younger queens love, support, and the benefit of generations of experience. The first senior queens in this organization were brand representatives always looking for opportunities to wear the sash and crown, whether it was joining a crowd at the local airport to welcome home the veterans of an Honor Flight, volunteering to sing the National Anthem at an event, or cheering the Wounded Warriors at a senior softball game. Then and now, we look for opportunities to “show the banner.” Of the many memories of the not-so-distant early days, one memory which stands out involved a day when we loaded a van, attended 5 events in Las Vegas, the last one very formal at the Venetian Hotel, then drove to Los Angeles and changed clothes in a parking lot to attend Fashion Week.

The brand was formally introduced to the pageant world in December 2015. Our original, founding queen attended Miss Universe at Planet Hollywood. The younger queens gravitated around the senior “Mama Queen.” While walking through the casino to the news conference, the brand was presented with the photo opportunity of a lifetime. The photograph of the senior queen with Steve Harvey went viral. The public’s perception of senior pageants was no longer one of “I didn’t know,” or that it is just a novelty, to now becoming publicly accepted. This acceptance continues to be nurtured through participation in mainstream media, and especially in building a relationship with the industry publication and “Gold Standard,” Pageantry magazine. For a non-pageant person, having the friendship of CEO and Publisher Carl Dunn has been invaluable and the single most important factor of many to which this organization can point.

The brand, while recognizable, is much more than a mere symbol or just pre-calculated attributes. For the Senior Pageants Group and the Ms. Senior USA and Ms. Senior Universe Pageants, the most recognizable brand element is the senior women themselves—their history, their stories, their dreams. The Mission Statement honestly says it:

Our organization honors and celebrates the accomplishments of women over 60. We encourage women as they approach 60 to embrace who they are, encourage them to understand what they can still accomplish and what they have to offer the world. We are the women and daughters of the “The Greatest Generation.” As Senior Women, we have nurtured our families, our careers and our local communities while surviving personal tragedy, economic depressions, regional conflicts and world wars. We have been present while the nations of the world went to the unthinkable brink of Nuclear Holocaust. We are strong, savvy, goal-oriented, wise and aware. We display these characteristics in our everyday lives, as people, and as humanitarians who always seek to improve the lives of others. As an organization, we seek to further empower women of all ages, nations and cultures to strive for equality, to achieve their personal best, to make real and meaningful changes and to individually redefine what it means to be a Senior Woman and role model to the communities of women who will follow us.