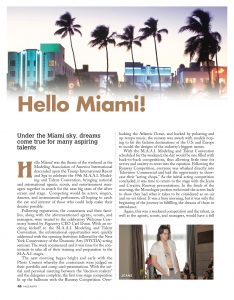 Under the Miami sky, dreams come true for many aspiring talents

Hello Miami! was the theme of the weekend as the Modeling Association of America International descended upon the Trump International Resort and Spa to celebrate the 59th M.A.A.I. Modeling and Talent Convention, bringing national and international agents, scouts, and entertainment managers together in search for the next big stars of the silver screen and stage. Competing would be actors, singers, dancers, and instrumental performers, all hoping to catch the eye and interest of those who could help make their dreams possible.

Following registration, the contestants and their families, along with the aforementioned agents, scouts, and managers, were treated to the celebratory Welcome Ceremony hosted by Pageantry CEO Carl Dunn. With an exciting kickoff to the M.A.A.I. Modeling and Talent Convention, the informational opportunities were quickly addressed with the opening festivities followed by the New York Conservatory of the Dramatic Arts (NYCDA) acting seminar. The week commenced and it was time for the contestants to take all of their training and preparation to the M.A.A.I. stages.

The next morning began bright and early with the Photo Contest whereby the contestants were judged on their portfolio and comp card presentations. With the initial and personal meeting between the “decision makers” and the delegates complete, the first true stage competition lit up the ballroom with the Runway Competition. Overlooking the Atlantic Ocean, and backed by pulsating and up-tempo music, the runway was awash with models hoping to hit the fashion destinations of the U.S. and Europe to model the designs of the industry’s biggest names.

With the M.A.A.I. Modeling and Talent Convention scheduled for the weekend, the day would be one filled with back-to-back competitions, thus allowing little time for nerves and anxiety to enter into the equation. Following the Runway Competition, everyone was whisked directly into Television Commercial and had the opportunity to showcase their “acting chops.” As the initial acting competition concluded, it was time to return to the stage with the Jeans and Creative Runway presentations. In the finale of the morning, the Monologue portion welcomed the actors back to show they had what it takes to be considered as on-air and on-set talent. It was a busy morning, but it was only the beginning of the journey in fulfilling the dreams of those in attendance.

Again, this was a weekend competition and the talent, as well as the agents, scouts, and managers, would have a full day of presentations. With the morning’s activities complete, the afternoon began in earnest with M.A.A.I. Has Talent. The talent competition is always entertaining and diverse in its competitors. Entertaining the judges were such talents as Vocalists (both with backing music as well as a cappella), Bollywood Dance, Ballet en Pointe, traditional Indian dance, and Instrumental. M.A.A.I. definitely presented a wide and diverse group of talent for the consideration of the audience and those who were tasked with making the difficult decisions of the weekend. With the completion of M.A.A.I. Has Talent, the stage and acting sets were again constructed for the afternoon’s activities of Soap Star (acting) and Swimsuit (runway).

The initial day was coming to a close, but M.A.A.I. had a very special celebration scheduled for all in attendance. To recognize the dedication to the ideals of M.A.A.I., as the original not-for-profit convention celebrating its 59th year, everyone was invited beachside for the Hello Miami! Party to visit with each other, review the day’s competitions, and take pictures alongside the surf of the gorgeous Atlantic Ocean. It was a wonderful ending to a busy day at M.A.A.I.

To read the rest of the MAAI feature… Click Here