The More You Know… 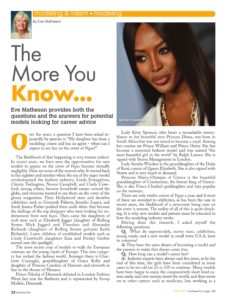 Over the years, a question I have been asked repeatedly by parents is: “My daughter has done a modeling course and has an agent – when can I expect to see her on the cover of Vogue?”

The likelihood of that happening is very remote indeed. In recent years, we have seen the opportunities for new models to appear on the cover of Vogue become virtually negligible. Here are some of the reasons why. It started back in the eighties and nineties when the era of the super model revolutionized the fashion industry. Linda Evangelista, Christy Turlington, Naomi Campbell, and Cindy Crawford, among others, became household names around the globe, and everyone wanted to see them on the cover of the glossy magazines. Then Hollywood stars and showbiz celebrities such as Gwyneth Paltrow, Jennifer Lopez, and Sarah Jessica Parker pushed them aside when they became the darlings of the top designers who were looking for endorsement from new faces. Then came the daughters of rock stars such as Elizabeth Jagger (daughter of Rolling Stones Mick Jagger) and Theodora and Alexandra Richards (daughters of Rolling Stones guitarist Keith Richards). Later, children of established models such as Cindy Crawford’s daughters Kaia and Presley Gerber moved into the spotlight.

The most recent crop of models to walk the European runways are the young royals of Europe. This new category has rocked the fashion world. Amongst them is Charlotte Casiraghi, granddaughter of Grace Kelly and daughter of Princess Caroline of Hanover and eleventh in line to the throne of Monaco.

Prince Nikolai of Denmark debuted in London Fashion Week last year for Burberry and is represented by Scoop Models, Denmark.

Lady Kitty Spencer, who bears a remarkable resemblance to her beautiful aunt Princess Diana, was born in South Africa but was not raised to become a royal. Among her cousins are Prince William and Prince Harry. She has become a seasoned fashion model and was named “the most beautiful girl in the world” by Ralph Lauren. She is signed with Storm Management in London.

Lady Amelia Windsor is the granddaughter of the Duke of Kent, cousin of Queen Elizabeth. She is also signed with Storm and is very much in demand.

Princess Maria-Olympia of Greece is the beautiful granddaughter of Constantine, the former king of Greece. She is also Prince Charles’s goddaughter and very popular on the runways.

There are only twelve covers of Vogue a year, and if most of these are awarded to celebrities, as has been the case in recent years, the likelihood of a newcomer being seen on the cover is remote. The reality of all of this is quite shocking. It is why new models and parents must be educated in how the modeling industry works.