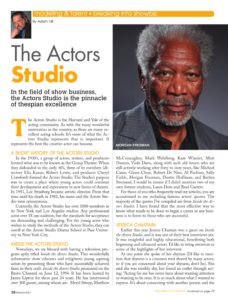 In the field of show business, the Actors Studio is the pinnacle of thespian excellence

The Actors Studio is the Harvard and Yale of the acting community. As with the many wonderful universities in the country, so there are many ex­cellent acting schools. It’s more of what the Ac­tors Studio represents that is important. It represents the best the creative actor can become.

A Short History of the Actors Studio

In the 1930’s, a group of actors, writers, and producers formed what was to be known as the Group Theatre. When they disbanded in the early 40’s, three of its members (di­rectors Elia Kazan, Robert Lewis, and producer Cheryl Crawford) formed the Actors Studio. The Studio’s purpose was to create a place where young actors could continue their development and experiment in new forms of theatre. In 1951, Lee Strasberg became artistic director. From that time until his death in 1982, his name and the Actors Stu­dio were synonymous.

Currently, the Actors Studio has over 1000 members in its ew York and Los Angeles studios. Any professional actor over 18 can audition, but the standards for acceptance are demanding and challenging. For the young actor who wishes to study the methods of the Actors Studio, they can enroll at the Actors Studio Drama School at Pace Univer­sity in ew York City.

Inside the Actors Studio

Nowadays, we are blessed with having a television pro­gram aptly titled Inside the Actors Studio. This wonderfully informative show educates and enlightens young aspiring actors by presenting those who have successfully achieved fame in their craft. Inside the Actors Studio premiered on the Bravo Channel on June 12, 1994. It has been hosted by James Lipton for these past 24 years. He has interviewed over 300 guests, among whom are: Meryl Streep, Matthew McConaughey, Mark Wahlberg, Kate Winslet, Matt Damon, Viola Davis, along with such old timers who are still actively working after forty to sixty years, like Michael Caine, Glenn Close, Robert De Niro, Al Pachino, Sally Fields, Morgan Freeman, Dustin Hoffman, and Barbra Streisand. I would be remiss if I didn’t mention two of my own former students, Laura Dern and Brad Garrett.

For those of you who frequently read my articles, you are accustomed to me including famous actors’ quotes. The majority of the quotes I’ve compiled are from Inside the Ac­tors Studio. I have found that the most effective way to know what needs to be done to begin a career in any busi­ness is to listen to those who are successful.

Earlier this year Jessica Chastain was a guest on Inside the Actors Studio, and it was one of their best interviews yet. It was insightful and highly educational, benefitting both beginning and advanced actors. I’d like to bring attention to some of the highlights of her interview.

At one point she spoke of her shyness (I’d like to men­tion that shyness is a common trait shared by many actors, so if you are concerned about your shyness, don’t be). She said she was terribly shy, but found an outlet through act­ing. “Acting for me has never been about wanting attention or wanting to be seen. It is so much about what I wanted to express. It’s about connecting with another person and the intimacy of what that is. In order to do so I had to overcome my shyness.”

Ms. Chastain began act­ing in small theatres in the Bay area of San Francisco. While performing Juliet in a production of Romeo and Juliet, she found out that the actor playing Romeo had been accepted to at­tend the prestigious Juil­liard Acting program in New York City. She thought to herself, “If he can get in, so can I.” And so she did.