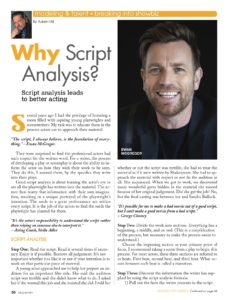 Several years ago I had the privilege of lecturing a room filled with aspiring young playwrights and screenwriters. My task was to educate them in the process actors use to approach their material.

“The script, I always believe, is the foundation of everything.” ~ Ewan McGregor.

They were surprised to find the professional actors had such respect for the written word. For a writer, the process of developing a play or screenplay is about the ability to inform the actor on how they wish their work to be seen. They do this, I assured them, by the specifics they write into their plays.

Good script analysis is about training the actor’s eye to see all the playwright has written into the material. The actors then marry that information with their own imagination, resulting in a unique portrayal of the playwright’s intention. The seeds to a great performance are within every script. It is the job of the actors to find the seeds the playwright has planted for them.

“It’s the actor’s responsibility to understand the script rather than relying on someone else to interpret it.” ~ Acting Coach, Stella Adler

Step One: Read the script. Read it several times if necessary. Enjoy it if possible. Remove all judgement. It’s not important whether you like it or not if your intention is to work on that particular piece of material.

A young actor approached me to help her prepare an audition for an important film role. She said the audition script was terrible and she didn’t know what to do. I asked her if she wanted this job and she insisted she did. I told her whether or not the script was terrible, she had to treat the material as if it were written by Shakespeare. She had to approach the material with respect or not do the audition at all. She acquiesced. When we got to work, we discovered many wonderful gems hidden in the material she missed because of her original judgement. Did she get the job? No, but the final casting was between her and Sandra Bullock.

“It’s possible for me to make a bad movie out of a good script, but I can’t make a good movie from a bad script.” ~ George Clooney

Step Two: Divide the work into sections. Everything has a beginning, a middle, and an end. (This is a simplification of the process, but necessary to make the process easier to understand.)

Choose the beginning section as your primary point of focus. I recommend taking a scene from a play to begin this process. For most actors, these three sections are referred to as beats. First beat, second beat, and third beat. What occurs between each beat is called a transition.