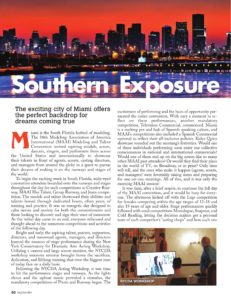 Miami is the South Florida hotbed of modeling. The 58th Modeling Association of America International (MAAI) Modeling and Talent Convention invited aspiring models, actors, dancers, singers, and performers from across the United States and internationally to showcase their talents in front of agents, scouts, casting directors, and managers from around the globe in a quest to pursue their dreams of making it on the runways and stages of the world.

To begin the exciting week in South Florida, wide-eyed convention attendees bounded onto the runways and stages throughout the day for such competitions as Creative Run­way, MAAI Has Talent, Group Runway, and Jeans compe­tition. The models and talent showcased their abilities and talents honed through dedicated hours, often years, of training and practice. It was an energetic day designed to calm nerves and anxiety for both the conventioneers and those looking to discover and sign their stars of tomorrow. As the initial day came to an end, everyone refocused and thought ahead to the numerous competitions and activities of the following day.

Bright and early, the aspiring talent, parents, supporters, directors, and renowned agents, managers, and directors learned the nuances of stage performance during the New York Conservatory for Dramatic Arts Acting Workshop. Utilizing a camera and large screen monitor, the NYCDA workshop intensive seminar brought home the sacrifices, dedication, and lifelong training that even the biggest stars of today face on a daily basis.

Following the NYCDA Acting Workshop, it was time to hit the performance stages and runways. As the lights shone and the upbeat music provided a stimulus, the mandatory competitions of Photo and Runway began. The excitement of performing and the buzz of opportunity per­meated the entire convention. With nary a moment to re­flect on these performances, another mandatory competition, Television Commercial, commenced. Miami is a melting pot and hub of Spanish speaking culture, and MAAI’s competitions also included a Spanish Commercial optional to reflect their all-inclusive policies. Kidzz °-1tizz showcase rounded out the morning’s festivities. Would one of these individuals performing soon enter our collective consciousness in national and international commercials? Would one of them end up on the big screen like so many other MAAI past attendees? Or would they find their place in the world of TV, on Broadway, or in print? Only time will tell, and the ones who make it happen (agents, scouts, and managers) were feverishly taking notes and preparing for one-on-one meetings. All of this, and it was only the morning MAAI session!

It was time, after a brief respite, to continue the full day of the MAAI convention, and it would be busy for every­one. The afternoon kicked off with the Legs competition for females competing within the age ranges of 13-18 and also 19 years of age and older. Stage performances quickly followed with coed competitions Monologue, Soapstar, and Cold Reading, letting the decision makers get a personal taste of each competitor’s “acting chops” and how each one could react on-set. The agents worked collectively to de­termine the best of the best and to make notes for discus­sions with individuals for improvement. Not to be dismissed, the NYCDA then held a very insightful, but in­formal, Q&A session for all in attendance.

The evening held even more opportunities. Being Miami, the MAAI held the Swimsuit Showcase for Coeds (ages 4-17 and 8-12), followed by Female (ages 13-17, 18-25, and 26 and over), and Males (13-19, and 20 years plus of age). It was a long, but rewarding day, and it was time to reflect upon the competition performances while relaxing with newfound friends from many cultures during the Model and Talent Blast party and celebration, ending the day on a positive and fun note.

To read the rest of the MAAI feature… Click Here