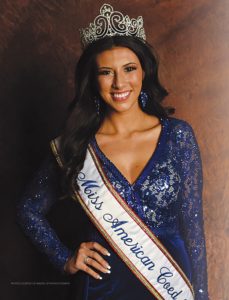 With so many titles and accolades at stake through the multiple divisions, the Miss American Coed pageant was a whirlwind of activity throughout the days and evenings. As the state and regional delegates moved through their busy schedules, they competed in the requisite Interview Appearance and Introduction, Interview (personal with each national judge), and Evening Wear. In a separation of the two national pageants, Miss American Coed’s top finalists would compete once more on-stage in both Introduction and Evening Wear. Optional competitions throughout the national event included Talent, Model, and Speech.

However, Miss American Coed is more than just a busy schedule of competitions. It is a time for delegates and their families from varying backgrounds to come together in the spirit of pageantry and the chance to make new lifelong friends from across the country. After a full day of competitions, delegates and their families were feted during the glamorous Miss American Coed Gala, during which everyone could win prizes and gifts in the Miss American Coed Raffle. One of the coveted prizes was a Pageantry PodCast interview with Pageantry magazine CEO Carl Dunn. The second night of celebrations was an opportunity to relax and let loose during the colorful and extravagant Glo Party, where 80s styles and tie dye were the preferred ensemble.

As the Glamour Lifestyle Industry returns to some sense of normalcy after almost a two year off-and-on hiatus, the Miss American Coed Pageant proved pageantry is alive-and-well and the spirit of competition is as glamorous and exciting as ever.