The Influence of Social Media 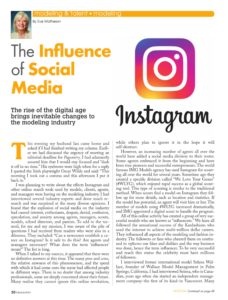 This evening my husband Ian came home and asked if l had finished writing my column. Earli­er we had discussed the urgency of meeting an editorial deadline for Pageantry. I had adamantly assured him that I would stay focused and “dash it off in no time.” His eyebrows were high when for a reply I quoted the Irish playwright Oscar Wilde and said: “This morning I took out a comma and this afternoon I put it back in.”

I was planning to write about the effects lnstagrarn and other online search tools used by models, clients, agents, and managers were having on the modeling industry. I had interviewed several industry experts and done much re­search and was surprised at the many diverse opinions. I found that the explosion of social media on the industry had caused interest, enthusiasm, despair, denial, confusion, speculation, and anxiety among agents, managers, scouts, models, school directors, and parents. To add to the tur­moil, for me and my mission, I was aware of the pile of questions I had received from readers who were also in a dilemma. They included: “Can a newcomer establish a ca­reer on Instagram? Is it safe to do this? Are agents and managers necessary? What does the term ‘influencer’ mean?” The list is long.

When I talked to my sources, it appeared that there were no definitive answers at this time. The many pros and cons, the relative newness of this phenomenon, and the speed with which it had come onto the scene had affected people in different ways. There is no doubt that among industry professionals, some are deeply concerned about their future. Many realize they cannot ignore this online revolution, while others plan to ignore it in the hope it will self-destruct.

However, an increasing number of agents all over the world have added a social media division to their roster. Some agents embraced it from the beginning and have been true pioneers and successful entrepreneurs. The world famous IMG Models agency has used lnstagram for scout­ing all over the world for several years. Sometime ago they created a specific division called “We Love Your Genes” (#WLYG), which enjoyed rapid success as a global scout­ing tool. This type of scouting is similar to the traditional method. When scouts find a model on lnstagram they fol­low up for more details, such as location and statistics. If the model has potential, an agent will visit him or her. The number of models using #WLYG increased dramatically, and IMG appointed a digital scout to handle the program.

All of this online activity has created a group of very suc­cessful models who are known as “influencers.” We have all followed the sensational success of the Kardashians who used the internet to achieve multi-million dollar careers. They influenced all aspects of the modeling and fashion in­dustry. The followers or fans who cheered them on contin­ued to influence our likes and dislikes and the way business was done, hence the term influencer. To be very successful and reach this status the celebrity must have millions of followers.