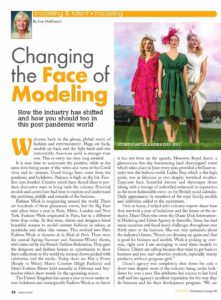 Welcome back to the glossy, global world of fashion and entertainment. Hugs are back, models are back and the fight-back-and-win indomitable American spirit is stronger than ever. This re-entry has been long awaited.

It is now time to accentuate the positive, while at the same time being aware of the twists and turns of the Covid virus and its variants. Good things have come from the pandemic and lockdown. Patience is high on the list. Families have bonded. Creative minds have shared ideas to produce alternative ways to bring back the industry. Potential models and actors have had time to explore and understand the problems, pitfalls and rewards of the business.

Fashion Week is reappearing around the world. There are hundreds of these glamorous events, but the Big Four take place twice a year in Paris, Milan, London and New York. Fashion Week originated in Paris, but in a different form than today. At that time, clients and designers hired beautiful women to model couture fashions in salons, at racetracks and other chic venues. This evolved into Paris Fashion Week or Semaine de la Mode de Paris. There were the annual Spring-Summer and Autumn-Winter shows, with dates set by the French Fashion Federation. They gave the designers and fashion houses an opportunity to show their collections to the world via runway shows packed with celebrities and the media. Today there are Prêt à Porter (Ready to Wear), Haute Couture (High Fashion) and Men’s Fashion Shows held annually in February and September which show trends for the upcoming season.

The United Kingdom has spent a year or more under severe lockdown and consequently Fashion Week as we know it has not been on the agenda. However, Royal Ascot, a glamourous five-day horseracing (and champagne) event which takes place in June every year, provided a brilliant re-entry into the fashion world. Ladies Day, which is the high point, was as fabulous as ever despite wretched weather. Exquisite hats, beautiful dresses and skyscraper shoes (along with a barrage of umbrellas) enhanced its reputation as the most fashionable event on the British social calendar. Daily appearances by members of the royal family, models and celebrities added to the excitement.

Here at home, I talked with industry experts about how they survived a year of lockdown and the future of the industry. Diane Dick who owns the Diane Dick International Modeling and Talent Agency in Amarillo, Texas, has had many successes and faced many challenges throughout over thirty years in the business. She was very optimistic about the industry’s future, “People are dressing up again and that is good for business and models. Work is picking up overseas, right now I am arranging to send three models to Greece. Clients are calling because they want to get back to business and you can’t advertise products, especially beauty products, without gorgeous girls.”

Diane’s agency was completely shut down for only a short time despite most of the industry being under lockdown for over a year. She attributes her success to her loyal staff and her agency’s excellent reputation for the way they do business and for their development program. “We are known for being very forthright with our models and for taking good care of them. We have had girls from Herzegovina, Greece, Italy, Mexico, Canada and around the United States. They go through our training program where they are developed and packaged.”

At this time most of the work is done in the Amarillo (TX) area. “If you have the models and the talent you can do well, regardless of where you are. Our town is certainly not a metropolitan area like Dallas, New York or Los Angeles, but we represent some of the most beautiful women, men and children.” Diane said the effects of the lockdown had taken its toll on everyone, especially the young in the form of self-esteem, loneliness and depression. “We address this whether the end goal is a modeling, or acting career or something else.”

Laura Gentry is an international model scout and owner of The LaLa Model and Talent Agency in Dallas, Texas. Laura has an unfailing eye for talent and has discovered both fashion and commercial models and represents men and women on television and in the music world. Laura is optimistic about the future. She told me, “Life is different and more challenging at the moment, but this industry is resilient. We are all survivors and have a passion for the careers we have chosen.” Addressing the effects of the pandemic, Gentry says, “Production on a large variety of things almost came to a halt. There was little or no demand for clothes or beauty items. That is turning around as people are getting back to work.  The pandemic also had a silver lining in the way talent will now self-tape and upload auditions in the future. This is going to be the new norm and it is fantastic. The in-person approach of every single casting is going to be a thing of the past.”

I asked Laura what advice she would give to aspiring models and actors given what we have been through. “I am a believer in going after your dreams and goals. I would never discourage anyone from going into this business. If you have a passion for it, and are willing to work hard, you can be successful.  It is more than just having a great book to show your work; you have to bring good health, personality and passion to the table and most of all, you have to treat it as a business.”

In another shift of the industry, Victoria’s Secret, which took its final runway bow in 2019, has rebranded to keep pace with the massive cultural change in the industry. The high-profile super models have been replaced by a diverse line-up of personalities which includes Indian actress Priyanka Chopra and World Cup soccer player Megan Rapinoe. Lingerie will not be shown in either the advertising campaigns, or podcasts, which have now replaced the runway shows. Victoria’s Secret was started by the late Roy Raymond who named his business after the very strait-laced Queen Victoria, no doubt to give it an air of refinement and respectability. The first runway show was held at the Plaza Hotel in NYC in 1995. At the time of writing, officials were still toying with the title of the rebrand.

A dream which started twenty years ago came to fruition on June 1 this year with the release of the movie Hamlet/Horatio. This new version of the centuries old Shakespearean play Hamlet can be seen on Amazon, Vudu, Apple TV, Google Play and AMC. I spoke to David Vando who wrote the script, just before the launch and he told me, “It is all very exciting but, what with the pandemic, we still have not had an opening party.  We hope to soon.”

David’s collaborators in this spectacular endeavor were David Wenzel, the producer of Hamlet/Horatio who has played Hamlet in several New York City productions and Sundance Award winner Paul Warner, the director. Predictably the film has won many prestigious awards in film festivals across the country including the New York Cinematography Awards and the Los Angeles Film Awards. David is a Shakespearean scholar, teacher, drama coach, lecturer, and playwright whose plays have been performed in London, Germany and Chicago. He also acts in Hamlet/Horatio. He is the owner of Models Mart Ltd., New York.

Never walk away from the dream!