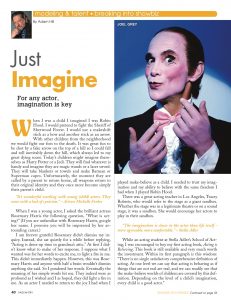 For any actor, imagination is key

When I was a child I imagined I was Robin Hood. I would pretend to fight the Sheriff of Sherwood Forest. I would use a makeshift stick as a bow and another stick as an arrow. With other children from the neighborhood we would fight our foes to the death. It was great fun to be shot by a fake arrow on the top of a hill so I could fall and roll inevitably down the hill, which always led to my great dying scene. Today’s children might imagine themselves as Harry Potter or a Jedi. They will find whatever is handy and imagine they are magic wands or a laser sword. They will take blankets or towels and make Batman or Superman capes. Unfortunately, the moment they are called by a parent to return home, all weapons return to their original identity and they once more become simply their parent’s child.

When I was a young actor, I asked the brilliant actress Rosemary Harris the following question, “What is acting?” (If you are unfamiliar with Rosemary Harris, google her name. I promise you will be impressed by her astounding career.)

I am forever grateful Rosemary didn’t dismiss my inquiry. Instead, she sat quietly for a while before replying, “Acting is dress-up time in grandma’s attic.” At first I didn’t know what to make of her response. I suppose what I wanted was for her words to excite me, to light a fire in me. This didn’t immediately happen. However, this was Rosemary Harris and anyone with half a brain wouldn’t dismiss anything she said. So I pondered her words. Eventually the meaning of her simple words hit me. They indeed were as profound as I wished and I as hoped, they did light a fire in me. As an actor I needed to return to the joy I had when I played make-believe as a child. I needed to trust my imagination and my ability to believe with the same freedom I had when I played Robin Hood.

There was a great acting teacher in Los Angeles, Tracey Roberts, who would refer to the stage as a giant sandbox. Whether the stage was in a legitimate theatre or on a sound stage, it was a sandbox. She would encourage her actors to play in their sandbox.

“The imagination is closer to the actor than life itself – more agreeable, more comfortable.” ~ Stella Adler

While an acting student at Stella Adler’s School of Acting, I was encouraged to buy my first acting book, Acting is Believing. This book is still available and very much worth the investment. Within its first paragraph is this wisdom: “There is no single satisfactory comprehensive definition of acting. At one level we can say that acting is behaving as if things that are not real are real, and we can readily see that the make-believe worlds of children are covered by this definition. Depending on the level of a child’s imagination, every child is a good actor.”