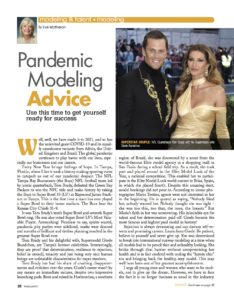 Use this time to get yourself ready for success

Well, well, we have made it to 2021, and so has the uninvited guest COVID-19 and its equally unwelcome variants from Africa, the United Kingdom and Brazil. The global pandemic continues to play havoc with our lives, especially our businesses and our careers.

Every New Year brings feelings of hope. In Tampa, Florida, where I live it took a history making sporting event to catapult us out of our pandemic despair. The NFL Tampa Bay Buccaneers (the Bucs) football team led by iconic quarterback, Tom Brady, defeated the Green Bay Packers to win the NFC title and make history by taking the Bucs to Super Bowl 55 (LV) at Raymond James Stadium in Tampa. This is the first time a team has ever played a Super Bowl in their home stadium. The Bucs beat the Kansas City Chiefs 31-9.

It was Tom Brady’s tenth Super Bowl and seventh Super Bowl ring. He was also voted Super Bowl LV’s Most Valuable Player. Astonishing! Needless to say, spirits soared, pandemic pity parties were sidelined, masks were donned and months of brilliant and tireless planning resulted in the greatest Super Bowl ever.

Tom Brady and his delightful wife, Supermodel Gisele Bundchen, are Tampa’s hottest celebrities. Interestingly, they are proof that determination, resilience to rejection, belief in oneself, tenacity and just being very nice human beings are unbeatable characteristics for super stardom.

Tom Brady has had his share of crushing disappointments and criticism over the years. Gisele’s career wasn’t by any means an immediate success, despite two impressive launching pads. Born and raised in Horizontina, a southern region of Brazil, she was discovered by a scout from the world-famous Elite model agency in a shopping mall in San Paolo during a school field trip. As a result, she took part and placed second in the Elite Model Look of the Year, a national competition. This enabled her to participate in the Elite Model Look world contest in Ibiza, Spain, in which she placed fourth. Despite this amazing start, model bookings did not pour in. According to iconic photographer Mario Testino, agents were not interested in her in the beginning. He is quoted as saying, “Nobody liked her, nobody wanted her. Nobody thought she was right – she was too this, too that, the nose, the breasts.” But Mario’s faith in her was unwavering. His inimitable eye for talent and her determination paid off. Gisele became the most famous and highest paid model in history!

Rejection is always devastating and can destroy self-esteem and promising careers. Learn from Gisele. Be patient, believe in yourself and never give up. She was determined to break into international runway modeling at a time when all models had to be pencil thin and unhealthy looking. She broke through that barrier without compromising her health and is in fact credited with ending the “heroin chic” era and bringing back the healthy, sexy model. This may well have been one of her greatest accomplishments.

I urge all young men and women who want to be models, not to give up the dream. However, we have to face the fact it is no longer business as usual in the industry. Modeling jobs have diminished, and models are concerned about their financial commitments. Also, under the best of circumstances, it can take six months to a year to build the basic foundation for a successful career. Overheads have skyrocketed and adhering to safety regulations is a major and costly concern. Everyone wants to hear good news about the future and that is impossible to predict at the moment.