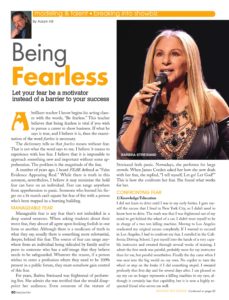 A brilliant teacher I know begins his acting classes with the words, “Be fearless.” This teacher believes that being fearless is vital if you wish to pursue a career in show business. If what he says is true, and I believe it is, then the examination of the word fearless is necessary.

The dictionary tells us that fearless means without fear. That is not what the word says to me. I believe it means to experience with less fear. I believe that it is impossible to approach something new and important without some apprehension. The problem is the magnitude of the fear.

A number of years ago, I heard FEAR defined as “False Evidence Appearing Real.” While there is truth in this acronym, nevertheless, I believe it may minimize the hold fear can have on an individual. Fear can range anywhere from apprehension to panic. Someone who burned his finger on a lit match can’t equate his fear of fire with a person who’s been trapped in a burning building.

Manageable fear is any fear that’s not imbedded in a deep seated neuroses. When asking students about their worst fear, they almost all agree upon looking foolish in one form or another. Although there is a modicum of truth in what they say, usually there is something more substantial, deeper, behind this fear. The source of fear can range anywhere from an individual being ridiculed by family and/or peers to someone who has a self-image that they believe needs to be safeguarded. Whatever the reason, if a person wishes to enter a profession where they need to be 100% present in a public forum, they must somehow gain control of this fear.

For years, Barbra Streisand was frightened of performing live. She admits she was terrified that she would disappoint her audience. Even someone of the stature of Streisand feels panic. Nowadays, she performs for large crowds. When James Corden asked her how she now deals with her fear, she replied, “I tell myself, Let go! Let God!’” This is how she confronts her fear. She found what works for her.

I did not learn to drive until I was in my early forties. I gave myself the excuse that I lived in New York City, so I didn’t need to know how to drive. The truth was that I was frightened out of my mind to get behind the wheel of a car. I didn’t trust myself to be in charge of a two ton killing machine. Moving to Los Angeles eradicated my original excuse completely. If I wanted to succeed in Los Angeles, I had to confront my fear. I enrolled in the California Driving School. I put myself into the hands of a very capable instructor and sweated through several weeks of training. I admit the first week was painful, probably more for my instructor than for me, but painful nonetheless. Finally the day came when I was sent into the big world on my own. No copilot to turn the wheel or step on the brake if I did something stupid. I sweated profusely that first day and for several days after. I am pleased to say my car no longer represents a killing machine in my eyes, although it certainly has that capability, but it is now a highly respected friend who serves me well.

Knowledge is what set me free from the fear of driving. I have a friend from New York who moved to LA about the same time I did. All these years later he relies on buses and his friends for transportation. Knowledge is the number one answer to minimizing and eventually eliminating fear.

Meryl Streep has spoken quite openly about the fact that when she’s presented with a new script she’s fearful that she won’t be able to achieve the result the script demands of her. Whatever approach she eventually takes in confronting her fear, what’s evident is she eventually fearlessly rolls up her sleeves and gets to work. Her apprehension slowly dissipates as she delves deeper into her work and begins to feel more secure. She has less fear because she knows what she is doing. She’s been educated in her craft, and she pulls out the necessary tools needed to approach this new material. She does what needs to be done. Do I know Meryl Streep’s process of work first hand? Of course I don’t. I assume this is what happens because we see the result in her performances. Somewhere and somehow, she overcame her fear.