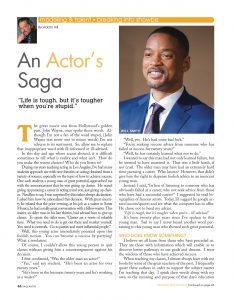 “Life is tough, but it’s tougher when you’re stupid”

The great movie star from Hollywood’s golden past, John Wayne, once spoke those words. Although I’m not a fan of the word stupid, (John Wayne was never one to mince words) I’m not adverse to its sentiment. So, allow me to replace that inappropriate word with ill-informed or ill-advised.

In this day and age where scams abound, it is difficult sometimes to tell what is reality and what isn’t. How do you make the wisest choices? Who do you listen to?

During my years teaching acting in Los Angeles, I’ve had many students approach me with new theories on acting obtained from a variety of sources, especially on the topic of how to achieve success. One such student, a young man of great potential, approached me with the announcement that he was giving up classes. He wasn’t giving up pursuing a career in acting mind you, just giving up classes. Needless to say, I was surprised by this rather abrupt declaration. I asked him how he rationalized this decision. With great sincerity he related that the prior evening, at his job as a waiter in Santa Monica, he had a really great conversation with a fellow waiter. This waiter, an older man in his late thirties, had advised him to give up classes. To quote the older man, “Classes are a waste of valuable time. What you need to do is get out there and market yourself. You need to network. Go to parties and meet influential people.”

Well, this young actor immediately pounced upon this foolish notion. You can become a success by partying! What a revelation.

Of course, I couldn’t allow this young person to quit classes without giving him a counterargument against his decision.

I first confirmed, “Was the older man an actor?”

“Yes,” said my student. “He’s been an actor for over twenty years.”

“He’s been in the business twenty years and he’s working as a waiter?”

“You’re seeking success advice from someone who has failed at success for twenty years?”

“Well, he has certainly learned what not to do.”

I wanted to say this man had not only learned failure, but he seemed to have mastered it. That was a little harsh, if not cruel. The older man may have had an extremely hard time pursuing a career. Who knows? However, that didn’t give him the right to dispense foolish advice to an innocent young man.

Instead I said, “In lieu of listening to someone who has obviously failed at a career, why not seek advice from those who have had a successful career?” I suggested he read biographies of famous actors. Today, I’d suggest he google actors/success/quotes and see what the computer has to offer. He chose not to heed my advice.

“Life is tough, but it’s tougher when you’re… ill-advised”