The Art of Learning 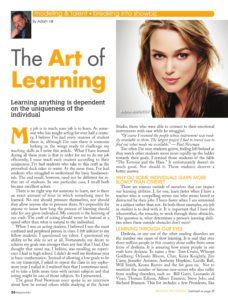 Learning anything is dependent on the uniqueness of the individual

My job is to teach; your job is to learn. As some­one who has taught acting for over half a centu­ry, I believe I’ve had every manner of student there is, although I’m sure there is someone lurking in the wings ready to challenge my teaching skills as I write this article. What I have learned during all these years is that in order for me to do my job efficiently, I must teach each student according to their uniqueness. I’ve had students who take to this craft as the proverbial duck takes to water. At the same time, I’ve had students who struggled to understand the basic fundamen­tals. The end result, however, need not be different for ei­ther set of students. In one particular case, I recall both became excellent actors.

There is no right way for someone to learn, nor is there an exact amount of time in which something must be learned. No one should pressure themselves, nor should they allow anyone else to pressure them. It’s impossible for anyone to know how long the process of learning should take for any given individual. My concern is the learning of our craft. The craft of acting should never be learned at a speed other than what is natural to the individual.

When I was an acting student, I believed I was the most confused and perplexed person in class. I felt inferior to my fellow students. I questioned my talent. I questioned my ability to be able to act at all. Fortunately, my desire to achieve my goals was stronger than any fear that I had. One thought that saved me, I believe, was recalling an experi­ence I had in high school. I didn’t do well my freshman yearn basic mathematics. Instead of allowing a low grade to be on my transcript, I asked to repeat the class in my sopho­more year. I nailed it. I realized then that I sometimes need­ed to take a little more time with certain subjects and that acting might be one of those subjects. So I persevered.

The great Paul Newman once spoke in an interview about how he envied others while studying at the Actors Studio, those who were able to connect to their emotional instruments with ease while he struggled.

“Of course I resented the people whose instrument was read­ily available to them. The largest project I had to travel was to find out what made me available.” ~Paul Newman

Too often I’ve seen students grieve, feeling left behind as they watch other students move more rapidly up the ladder towards their goals. I remind those students of the fable “The Tortoise and the Hare.” It unfortunately doesn’t do much good. or should it. Those students deserve a better answer.

Why Do Some Individuals Learn More Slowly Than Others?

There are reasons outside of ourselves that can impact our learning abilities. I, for one, learn faster when I have a teacher who is compelling versus one who seems bored or distracted by their jobs. I learn faster when I am interested in a subject rather than not. In both those examples, my job as student is to deal with it. It is important that I have the wherewithal, the tenacity, to work through these obstacles. The question is, what determines a person’s learning abili­ties when these outside obstacles don’t exist?

Learning Through Our Eyes

Dyslexia, or any one of the other reading disorders are the number one cause of slow learning. It is said that over three million people in this country alone suffer from some form of dyslexia. It is amazing how many people in our craft have dyslexia. To name a few: Tom Cruise, Whoopi Goldberg, Orlando Bloom, Cher, Keira Knightly, Jim Carey, Jennifer Aniston, Anthony Hopkins, Lucille Ball, Will Smith, Keanu Reeves and the list goes on. Not to mention the number of famous non-actors who also suffer from reading disorders, such as: Bill Gates, Leonardo di Vinci, Thomas Edison, Albert Einstein, Steve Jobs, and Richard Branson. This list includes a few Presidents like George Washington, Thomas Jefferson, John F. Kennedy, and George W. Bush.

You may not be able to read as fast as the next guy, but you can learn as well as anyone. So, if you have any form of reading disorder, you’re in pretty good company. I love the image created by the person who said, “I read as slow as molasses, but I learn it all anyway.”