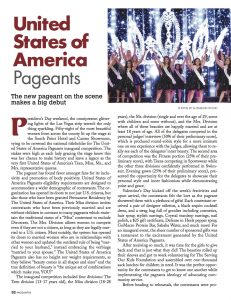 The new pageant on the scene makes a big debut

President’s Day weekend, the omnipresent glittering lights of the Las Vegas strip weren’t the only thing sparkling. Fifty-eight of the most beautiful women from across the county lit up the stage at the South Point Hotel and Casino Showroom, vying to be crowned the national titleholder for The United States of America Pageants inaugural competition. The stakes were high as each lady gracing the stage knew this was her chance to make history and leave a legacy as the very first United States of America’s Teen, Miss, Ms., and Mrs. representative queens.

The pageant has found favor amongst fans for its inclusivity and promotion of body positivity. United States of America Pageants eligibility requirements are designed to accommodate a wider demographic of contestants. The organization has opened its doors to not just U.S. citizens, but also those who have been granted Permanent Residency by The United States of America. Their Miss division invites contestants who have been previously married and are without children in contrast to many pageants which maintain the traditional status of a “Miss” contestant to exclude Divorcees. The Mrs. Division allows women to compete even if they are not a citizen, as long as they are legally married to a U.S. citizen. Most notably, the system has opened its doors to married women who are in relationships with other women and updated the outdated rule of being “married to your husband,” instead embracing the verbiage “married to your spouse.” The United States of America Pageants also has no height nor weight requirements, as they believe “beauty comes in all shapes and sizes” and the true definition of beauty is “the unique set of combinations which make you, YOU!”

The inaugural competition included four divisions: The Teen division (13-17 years old), the Miss division (18-28 years), the Ms. division (single and over the age of 29, some with children and some without), and the Mrs. Division where all of these beauties are happily married and are at least 18 years of age. All of the delegates competed in the personal judges’ interview (50% of their preliminary score), which is produced round-robin style for a more intimate one on one experience with the judges, allowing them to really see each of the delegates’ inner beauty. The second area of competition was the Fitness portion (25% of their preliminary score), with Teens competing in Sportswear while the other three divisions confidently performed in Swimsuit. Evening gown (25% of their preliminary score), presented the opportunity for the delegates to showcase their personal style and inner fashionista while demonstrating poise and grace.

Valentine’s Day kicked off the week’s festivities and upon arrival, the contestants felt the love as the pageant showered them with a plethora of gifts! Each contestant received a pair of designer stilettos, a black sequin cocktail dress, and a swag bag full of goodies including cosmetics, hair spray, stylish earrings, Crystal teardrop earrings, nail polish, a $25 gift certificate, Defense in Heels pepper spray, GoMacro Protein Bar, Sababa Water, and much more! For an inaugural event, the sheer number of sponsored gifts was a testament to the excitement generated by the United States of America Pageants.

After receiving so much, it was time for the girls to give back and that is just what they did! The beauties rolled up their sleeves and got to work volunteering for The Serving Our Kids Foundation and assembled over one-thousand sack lunches for children in need. It was the perfect opportunity for the contestants to get to know one another while implementing the pageants ideology of advocating community service.

Before heading to rehearsals, the contestants were provided with a self-defense class, courtesy of pageant sponsor Patti Stewart of Defense in Heels. The hands-on training gave each of the ladies the tools they needed to be aware of their surroundings and how to handle a variety of situations to ensure their safety. As the contestants partnered up to practice the techniques being taught, the bonding continued, creating a real sense of sisterhood among the delegates. The experience truly embodied the organizations motto of “empowering women.”

The pageant, which prides itself in finding the perfect balance of brains and beauty, started the competition with the judge’s interview, followed by two nights of onstage preliminary competitions. The fitness and gown preliminaries were both preceded by a parade of Patriotic Costumes. In honor of President’s Day Weekend, the contestants selected an ensemble which reflected their personal style and American pride. While the glittering gowns were a sight to see, it seems the Patriotic Costume competition stole the show and will remain an integral part of the United States of America Pageants.

After the preliminaries concluded, the ladies were transported to the Las Vegas Strip to see the hit show Human Nature at the Venetian. The contestants were delighted to get out of their seats to sing and dance with the music as the performers rocked the stage. Afterwards the ladies were invited on stage to take pictures with the stars of the show, who treated the girls like royalty, even singing “Happy Birthday” to Mrs. Colorado in helping to celebrate her special day!

When the lights went up during finals and the ladies took the stage, the excitement in the audience was palpable and the delegates were dazzling in their couture black sequin cocktail opening number ensembles. As the contestants danced to the beat of Fifth Harmony’s That’s My Girl remix, the LED backdrop screen proudly displayed the United States of America Pageant’s custom designed crown which has become a recognizable part of their brand. Hues of silver, blue, and purple danced and swirled behind the tiara making for a spectacular display of pageantry during the opening production number.

Don’t be fooled. The United States of America Pageants is not all fun and games, and the competition throughout the week was fierce. The delegates didn’t make it easy for the celebrity judges’ panel which included Christy Gibel of TLC’s Little Women L.A., Dr. Tess Mauricio of the Dr. Tess Show and Professional MMA Fighter Cory Hendricks. When the judges’ picks for the semi-finalists were announced onstage, the packed showroom went wild with cheers from friends, family and fans alike. The slates were wiped clean for those moving forward who would once again compete in Fitness (25% of their final score), and Evening Gown (25% of their final score).

The finals’ Fitness competition was set against a vibrant beach scene background and a medley of upbeat music which kept the excitement going after the adrenaline rush of hearing their names called as a semi-finalist. Following, the contestants changed into their Evening Gowns which included sparkling sequins, beads, and flowing trains. Each lady exuded beauty and elegance against the backdrop of the stage, adorned with a magnificent staircase which radiated a sense of grandeur. Winnowing these 26 contestants to the 12 finalists was no easy task for the judges, but ultimately only 3 contestants in each division would survive to the final round and answer the Onstage Question (50% of their final score).

Before the emcees were handed the envelope with the names of those lucky enough to continue on the path that could lead to a history making moment of winning the pageant’s first national title, all of the contestants graced the stage in their gowns for the Parade of Delegates. As the non-finalists exited the stage, only those being considered for a national title remained. The sisterhood was evident as the ladies held hands, each hoping to hear their name called.

The pageant posed relevant questions relating to pageantry and society. Teens were asked if “Pageant contestants should be judged on their social media,” to which the consensus was a resounding “yes.” Miss contenders were asked, “Do you think titleholders should take a public stance on political issues?” The opinions varied, but the confidence and conviction in their beliefs was a central theme between the contestants. Ms. finalists were also asked about social media platforms, particularly if they should be held accountable for their personal accounts as a titleholder. The Mrs. had the toughest question of the evening being quizzed, “If crowned the winner, what plan of action would you execute to embody the motto of the pageant to empower, inspire, and uplift?” The answers were a true testament to the relevance of today’s married women in roles of leadership and advocacy in our society.

Many of the ladies were recognized onstage for specialty awards, receiving a stunning crystal trophy which proved the pageant spared no expense when it came to celebrating the accomplishments of the participants. Mrs. Nevada, Katie Ladomerszky took home two awards, The Brand Ambassador award and the Patriotic winner of the Costume Contest for the Ms. & Mrs. divisions. Miss Texas, Kendal Kulhanek received recognition for having the best Patriotic costume for the Teen & Miss divisions. Two Congenitally awards were bestowed on the class of delegates and the contestants chose Texas Teen Blaire Messman and Mrs. Colorado Sylvia Waller as the ladies they felt were the friendliest and most congenial. The pageant also awarded two photogenic awards: Miss Hawaii Zoey Kaneakua and Mrs. Arkansas, Alexis Johnson were deemed the most captivating through the lens of the camera. The pageant’s People’s Choice Award went to Mrs. Louisiana, Courtney Teuton, who selected The Haven in Houma, which lends support to victims of Domestic Violence as her charity of choice. A portion of the proceeds from the online voting were donated to Mrs. Louisiana’s charity totaling over $1,000.00!

This may have been the first United States of America Pageants competition, but it definitely won’t be the last. The new kid on the block made a huge splash in the pageant community this year, hosting over 10 state pageants, were nominated for multiple industry awards, their founder and national director, Tanice Smith, was named one of the Top 100 Women in Las Vegas, and with their spectacular production this year, it is no wonder United States of America Pageants is one-of-the fastest growing pageant systems in the nation.