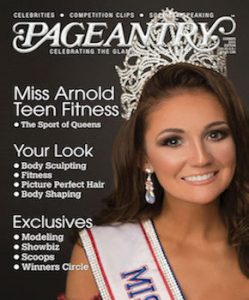 Fantastic… Fifteen… and Fabulous! National American Miss celebrated its 15th anniversary in a big way this year at its annual National Pageant held in Anaheim, California. Fifteen years of proven excellence led to NAM having its biggest week yet, where more than $500,000 in cash, scholarships, prizes, and awards were awarded among the national delegates. This year was all about celebrating NAM’s innovative legacy while engineering the future look of pageantry. The 2017 NAM National Pageant was definitely one to remember… three sleek runway stages, a posh outdoor Party on the Plaza, eleven exciting final shows, a Ford Mustang convertible giveaway, and so much more.
The week of “Fifteen and Fabulous” celebrations kicked off for the national delegates as they were individually greeted by friendly NAM staff and national royalty. After check-in, the girls attended the spirited Neon Welcome Party held for each of the six age divisions where girls reunited with old friends and made new ones. Dancing the night away in the electric neon and black light atmosphere proved to be an evening the girls will never forget.
One of the highlights of the week was NAM’s 15th birthday bash. New to pageantry, the Party on the Plaza featured rows of California-cool food trucks lined up between thirty towering LED-glowing palm trees. The expansive outdoor plaza of the Anaheim Convention Center provided the perfect venue for this festive event held exclusively for the pageant contestants and their families. Brimming with festival-inspired activities, with just over 2,000 people in attendance, it was a night of delicious food and fun for people of all ages. A photo booth, bounce-houses, games, dancing, and a high energy DJ kept the party going throughout the evening. More than twenty former NAM national queens came in from across the country to share in the fun with the national delegates and their families. Adding sparkle to the evening was Nia Sanchez, Miss USA 2014, who was on hand to sign autographs, pose for photo-ops, and personally greet the Party on the Plaza guests.
The fun and festivities continued throughout the week. The girls took part in a VIP photo shoot in front of Sleeping Beauty’s Castle at Disneyland. After the photo shoot, they spent the entire day with family and new friends at the happiest place on earth, Disneyland, where a visit would not be complete without the iconic holiday parade and fireworks show topping off the magical day. To add to the fun, the families were chauffeured through the famous streets of Hollywood, Rodeo Drive, and Santa Monica Beach – some of the most iconic places that Southern California has to offer.
On Thanksgiving Day, the contestants and their families attended the beautiful black and white formal Thanksgiving Banquet. They counted their blessings over a gorgeous Thanksgiving feast, complete with turkey, stuffing, and pumpkin pie as they enjoyed seasonal vocals from award winning soloists and Dickens era carolers. And if that wasn’t enough Thanksgiving merriment, each delegate in attendance was in the ultimate-door-prize-drawing-of-a-lifetime for a brand new Ford Mustang convertible. This year’s lucky winner of the Mustang was a very surprised and happy nine year old – Jessy Pasantino of New Jersey.
Before the crowning of the twelve new national queens, each of the competitors displayed their diverse passions through the vast assortment of NAM optional contests, including Talent, Photogenic, Casual Wear ModelingSM, SpokesmodelSM, Actress, Top Model SearchSM, Academic Achievement, Heart of ServiceSM Award, Runway Model SearchSM, and many more. The optional contests provided the national participants an opportunity to perform on stage in front of modeling and acting agents and professionals from the entertainment industry, as well as earn thousands of dollars in cash, scholarships, prizes, trophies, and national titles that were presented at the annual “NAMMY” AwardsSM.
The stylish Runway Model SearchSM competition celebrated its third year at NAM Nationals with new sponsorship endorsements through a leading gown fashion designer and footwear designer. Each of the contestants participated in a training camp where they learned about the high-fashion modeling industry, experienced a real-world modeling go-see with industry experts, and then strutted down the runway in a glamorous and fashion-forward ensemble while vying to become the next face of the industry leading designer. The two deserving delegates selected for this honor, Rylee White and Amanda Torchia, will be featured in a national digital advertising campaign, will enjoy exclusive modeling opportunities, and will walk the red carpet at New York Fashion Week. The winner of the Runway Model SearchSM competition within each age division received a magnificent signature rhinestone encrusted stiletto heel trophy, fashioned exclusively for NAM, courtesy of their national footwear designer.
National American Miss demonstrated, yet again, why they have been voted #1 in pageantry for three years in a row. The three jaw-dropping glossy all-white Hollywood designed stages provided the perfect backdrop for the array of laser lighting and special effects. Awarding more than one million dollars in cash, scholarships, and prizes annually nationwide, NAM has ramped up its prize package to the next level.
A host of new national prize sponsors were highlighted throughout the exciting week, both on-stage and off, including the prestigious fashion designer who personally designed the stunning little black dress production number outfit that the national delegates wore to open each of the final shows. As if that wasn’t enough, the designer also provided an exclusive reception at her Austin, Texas, headquarters, where each of the twelve national queens were invited to select a complimentary formal gown from her extensive and dazzling collection.