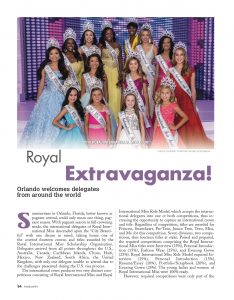 Summertime in Orlando, Florida, better known as pageant central, could only mean one thing, pageant season. With pageant season in full crowning mode, the international delegates of Royal International Miss 2020 descended upon the “City Beautiful”with one dream in mind, taking home one of the coveted fourteen crowns and titles awarded by the Royal International Miss Scholarship Organization and experience a Royal extravaganza. Delegates arrived from all points throughout the U.S., Australia, Canada, Caribbean Islands, China, Haiti, Mexico, New Zealand, South Africa, the United Kingdom, with only one delegate unable to attend due to the challenges presented during the U.S. visa process.

However, required competitions were only part of the excitement. Additional recognitions would be awarded for outstanding presentations in Royal Top Model, Talent, Statewear, Community Awareness (a twist on Spokesmodel with an added decoration of jeans), Casual Wear, Fitness Wear, and Photogenic. More awards include National Supermodel, Volunteer Service (a mainstay of pageantry), National Appearance, National Scrapbook, Academic Achievement, Portfolio, and the Regal Excellence Award. With so many required and optional events to choose from, Royal International Miss would award a cornucopia of titles, crowns, trophies, and awards.

A week at Royal International Miss is a week of memories to last a lifetime, beginning with the initial arrival day scheduled with Registration, Rehearsal, and Orientation. However, in true Royal International Miss style, each day ends with a chance to decompress from the anxiety of competition, enjoy the time with family and newfound friends – and arrival day was no different with the highly anticipated Queen’s Reception Luau encompassing the entertaining Fire-Twirlers and Hula Dancers. For the young or not-so-young, the reception was a perfect ending to the first day which not even the omnipresent Central Florida afternoon thunderstorms could dampen.

With so many required and optional competitions, photo shoots, and rehearsals scheduled throughout the week, Royal International Miss was a whirlwind of activities. Depending on the delegate’s division, one of the competitions was always in session. Following another full day of impressing their qualifications upon the judges, the second night treated everyone to the “Welcome to Florida”dinner and party, and not just any dinner party. This party included the live performance of Beach Boys styled music which had everyone dancing in the aisles and onstage, singing along.

Another day of required and optional competitions beckoned. Aside from rehearsals, many spent their time between Casual Wear, Spokesmodel, Personal Introduction, Royal Top Model, and Interviews. Then of course, more rehearsals for the final show before the final event of the evening, the Night of Hope Fashion Show which is yet another cause close to the Royal International Miss family. Inclusive of all delegates, family, and supporters, the Night of Hope Fashion Show benefits the ever worthwhile Special Olympics and is always an anticipated affair with everyone in attendance providing their full support to the organization.

The following morning began in earnest with events such as Personal Introduction and Interview, standard required competitions. Optionally the stage also welcomed Fitness Wear, Spokesmodel Competitions, Royal Top Model, and the always visually exciting and crowd entertaining State Costume presentations. However, Royal International Miss also has a unique competition which everyone enjoys, the Purple Passion Competition, where the contestants command the stage in their personal purple outfit of choice and it was quite a kaleidoscope of purple. Who knew there were so many variations of the color purple? The Purple Passion competition is a personal embodiment of Royal International Miss and was devised to support a very important cause, the Royal Foundation Dream Scholarship Fund with the entirety of the proceeds of the competition going to the scholarship foundation in support of those in need and promoting the ideals of the pageant industry.

As the week neared its midpoint, the stage presentations, personal interviews, and rehearsals were the order of the day as the judges continued to narrow their choices for the title of Royal International Miss 2019 and Royal International Miss Role Model. What would one expect after a day of competition? A theme party of course. Not just any theme party. Although it was summertime in Florida, everyone was welcomed to the winter wonderland dinner and party of “Christmas in July”replete with all the holiday accoutrements including Christmas trees, snowmen and backdrops great for any Christmas card.  There was even a station to write letters to the troops.  Although no one wanted the night to end, each individual left with visions of Santa and sugarplum fairies dancing in their dreams and the knowledge that the final full day of competitions awaited.

Proving itself Hollywood worthy, the grand ballroom filled to capacity with everyone in their finest red carpet glam.  As the international cadre of delegates arrived, they were treated to a true red carpet experience with the traditional step-and repeat all the while surrounded by the flashing lights of the paparazzi and of course, the ever present supporters and their cameras. However, in an unexpected surprise on the red carpet, each one enjoyed a photo-op with Pageantry CEO Carl Dunn, followed by their personal showcase, and then were once again photographed with fashion designer Jonathan Kayne on the Royal International Miss Red Carpet. And the excitement of the night only increased with the awards ceremony to follow the formal dinner with the stage set in full “Oscar”fashion, included ten-foot tall “Oscar”replicas framing the stage, “Oscar”statuette souvenirs, and “Oscar”chocolates. There was even an “Oscar”greeting the guest in full “Oscar”gold regalia. Following dinner, the “Royal Oscars”were presented to all those who had competed within the optional rounds of Royal International Miss.

During the final show, Pageantry CEO Carl Dunn was welcomed to the stage to present the highly coveted Pageantry Spirit Award. But, midway through his presentation the show was stopped for another announcement. Much to his surprise and at a loss-for-words, Mr. Dunn was presented with the Royal Spirit Award for his support of Royal International Miss and of the glamour lifestyle industry. Then continuing, though still stunned, he presented the Pageantry Spirit Award to Jeff LeForce, who was beckoned center stage to thunderous applause and a standing ovation from the adoring crowd, demonstrating his endearment to those whose lives he has touched and of his commitment to the ideals of Royal International Miss. In an ironic twist of fate, Mr. Dunn and Mr. LeForce were the presenters of each other’s recognitions and were genuinely moved by the moment.

One again, the Royal International Miss Scholarship Organization had brought young girls and women together, along with their families and friends, from around the globe to celebrate their shared dreams and to experience the diversity each country represents through pageantry. Through their shared experiences of competition and the unique theme parties, a newfound admiration for others was formed through a pageant known royally as Royal International Miss.