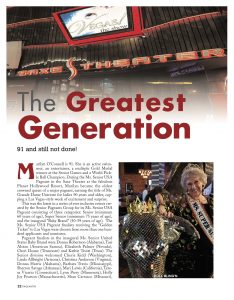 Marilyn O’Connell is 91. She is an active swimmer, an entertainer, a multiple Gold Medal winner at the Senior Games and a World Pickle Ball Champion. During the Ms. Senior USA Pageant in the Saxe Theater at the fabulous Planet Hollywood Resort, Marilyn became the oldest crowned queen of a major pageant, earning the title of Ms. Grande Dame Universe for ladies 90 years and older, capping a Las Vegas-style week of excitement and surprise.

As the ladies arrived for their exciting Las Vegas week, they were treated to gold and silver goodie bags filled with treats from sponsors like coupons and shopping opportunities for the Miracle Mile Shoppes valued in excess of $2,500. The Ms. Senior USA delegates were also met by a documentary crew from Europe who had been embedded with some of the queens for over a week and traveled with them from their homes to Las Vegas. Halal Doc is a well-respected and award-winning film organization from Amsterdam led by director Sophia Dros, producer Tess Vermeer, and a camera and sound crew consisting of Boas van Milligen, Job Michel and Lykle Tuinstra. Daily pageant photography was provided by Gary Duffel, with Nikki Segal providing assistance with hair styling and make-up.

The inaugural day began with an orientation and special training followed by the Queens’ Breakfast at CafÈ Hollywood, surrounded by the photos and memorabilia of Hollywood celebrities. Here, the new “girls” were welcomed into a lifetime club where everyone was provided a folder containing the information they would need throughout the week. They were joined by pageant veterans Ida White (Ms. Super Senior Virgin Islands), Correan Baker (Ms. Senior Ohio USA), Estelita Paulin (Ms. Senior Philippines Universe), TangLi Ping (Ms. Senior China), Carolie Swindle (Founding Ms. Senior Nevada USA), and Salve Edelman (Ms. Senior Asia Pacific Universe). These ladies had traveled to volunteer their welcomed assistance with the pageant, and to attend the first ever “Showgirl Bootcamp” hosted at the Saxe Theater.

In all, more than forty contestants, queens, and volunteers attended the Showgirl Bootcamp. They learned and reaffirmed their stage presence, presentations, makeup, and just had fun! The Saxe Theater is a working venue with multiple shows each day and evening. That night, courtesy of “ButtsinSeats,” the queens attended Las Vegas, the Show and were able to see an actual working production on the same Las Vegas stage where they attended the bootcamp and would later rehearse, perform and compete in the Ms. Senior USA finals.

Rehearsals started the next day, followed by the round robin interviews. In the evening, the queens attended a public meet and greet at the American PBR Bar, with a blinged and crowned mechanical bull. The public was entertained and surprised when the queens, most in their 70’s and 80’s, were witnessed riding the mechanical bull, with all of the festivities caught on camera by the ever omnipresent and vigilant documentary crew.

Later in the week, the queens were treated to a limo-bus ride for a shopping excursion at Dubarry’s Fashions. Owned and operated by Rita David (former Miss Belgium Universe) and her husband Derek David (original member of the Platters), Dubarry’s Fashions is known the world over as “Bling and Gown Central”, if it has a crystal or rhinestone, it is likely to have a place in the store.

Following a full day of shopping, the Queens’ Ball was held in the evening, bringing the day to a glamorous close. The Ms. Senior USA Pageant has diligently searched Las Vegas historical sites to host this ball. The queens have been to the Liberace Mansion, the Doumani Mansion, the Hart Mansion (Las Vegas home of Elvis Presley), and this year, the famous Italian American Club featured in the movie “Casino.” For sixty years, the Italian American Club was the business center and entertainment hub for many of Las Vegas’ more notorious residents. In recent years, the club’s memorabilia has found its way to the Las Vegas Mob Museum ñ another Las Vegas landmark which was the actual courthouse where the Kefauver Congressional Hearings were held on the Mafia. These hearings were featured in “The Godfather II.”