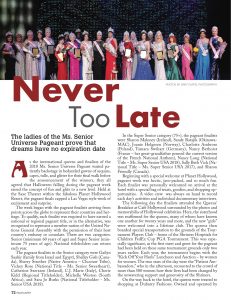 The ladies of the Ms. Senior Universe Pageant prove that dreams have no expiration date

As the international queens and finalists of the 2018 Ms. Senior Universe Pageant waited patiently backstage in bedazzled gowns of sequins, capes, tulle, and glitter for their final walk before the announcement of the winners, they all agreed that Halloween falling during the pageant week raised the concept of fun and glitz to a new level. Held at the Saxe Theater within the fabulous Planet Hollywood Resort, the pageant finals capped a Las Vegas style week of excitement and surprise.

The week began with the pageant finalists arriving from points across the globe to represent their countries and heritage. To qualify, each finalist was required to have earned a national or regional pageant title, or in the alternative, was recognized to represent a member nation of the United Nations General Assembly with the permission of their host country’s embassy or consulate. There are two categories: Senior (minimum 60 years of age) and Super Senior (minimum 75 years of age). National titleholders can return each year.

Beginning with a special welcome at Planet Hollywood, pageant week was hectic, jam-packed, and so much fun. Each finalist was personally welcomed on arrival at the hotel with a special bag of treats, goodies, and shopping opportunities. A video crew was always on hand to record each day’s activities and individual documentary interviews.

The following day the finalists attended the Queens’ Breakfast at Café Hollywood surrounded by the photos and memorabilia of Hollywood celebrities. Here, the sisterhood was reaffirmed for the queens, many of whom have known one another for twenty years and more, and the new “girls” were welcomed into a lifetime club. The queens then boarded special transportation to the grounds of the Tournament Players Club – home of the Shriners Hospitals for Children FedEx Cup PGA Tournament. This was especially significant, as the first meet and greet for the pageant had been held on these same tournament grounds only two years earlier. Each year, the tournament begins with the “Kick Off Your Heels” Luncheon and Auction – by women for women. The true stars of the day were the “Patient Ambassadors,” who in the afternoon, recounted to the crowd of more than 500 women how their lives had been changed by the unwavering support and generosity of the Shriners.

On the way back to the hotel, the queens were treated to shopping at Dubarry Fashions. Owned and operated by Rita David (former Miss Belgium Universe) and her husband Derek David (original member of the Platters), Dubarry’s Fashions is known the world over as “Bling and Gown Central” – if it has a crystal stone, it is likely to have a place in the store. That evening, Saxe Productions hosted the queens for a special showing of Viva, Las Vegas!

With judges’ interviews or rehearsals each morning, the afternoons were filled with public meet-and-greets in the theaters and balconies of the Miracle Mile Shoppes and a special Halloween Queens Masquerade Ball hosted in the resplendent Doumani Mansion by the first Super Senior and Lifetime Achievement Award recipient Cindy Doumani. Ms. Doumani was such a gracious hostess and went beyond everyone’s expectations.