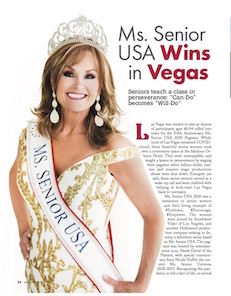 Las Vegas was treated to awe as dozens of participants ages 60-94 rolled into town for the Fifth Anniversary Ms. Senior USA 2020 Pageant. While most of Las Vegas remained COVID-closed, these beautiful senior women took over a convention space at the fabulous Orleans Hotel. They were unstoppable, and taught a lesson in perseverance by staging their pageant when billion-dollar casinos and massive stage productions shows were shut down. Energetic yet safe, these senior women served as a wake-up call and were credited with helping to kick-start Las Vegas back to normalcy.

Ms. Senior USA 2020 was a testament to senior women and their living example of #Embrace, #Encourage, #Empower. The women were joined by Southwest Video of Los Angeles, and another Hollywood production company seeking to develop a television series based on Ms. Senior USA. The pageant was hosted by entertainment icon, Derek David of the Platters, with special commentary from Nicole Duffel, the current Ms. Senior Universe 2020-2021. Recognizing the pandemic is still a fact of life, on arrival in Las Vegas, each Senior Queen was greeted by an EMT who also performed the necessary health checks, and presented the Queen with a package which included the usual swag, but also included Ms. Senior USA and Ms. Senior Universe specialty brand masks, after which the Senior Queens were personally escorted to the hotel, and to each event thereafter to ensure their safety.

After arrival, beginning with a steak and egg brunch hosted by the Boyd Gaming Corporation, the Senior Queens were treated to pre-pageant activities which have become the standard for Ms. Senior USA Pageant week. During brunch, the Ms. Senior USA Queens were introduced to the new sash and banner design by the Sash Company which was sturdier, with higher quality materials and crystals than previous inceptions, including a bonus for many Queens present, a featured hidden pocket that could hold the ever-present cell phone. Following brunch, the Queens were transported to Tei Spa Beauty, a special individual products location “Where Beauty Meets Hi-Tech.” Representatives treated the women to gifts and a presentation on empowerment and how to feel comfortable and beautiful in their own skin. Ms. Senior USA sponsor, DuBarry Fashions was next for bling shopping. To the uninitiated, DuBarry has been known to issue warnings regarding the brightness of the thousands of crystal encrusted products lining its shelves and walls.

The next day, the Ms. Senior USA Queens were introduced to an 80-foot hot air balloon brought over 1,000 miles to Las Vegas from the State of Washington by Dream Catcher, a company owned by Queen Captain-Crystal Stout. The City of Las Vegas assisted Dream Catcher by providing a park from which to launch this one-of-kind balloon which included a special seat designed for kids, the disabled, and elderly. Through this special design, individuals normally shut-in can experience the power of flight, with Dream Catcher providing special rides to disabled veterans before the arrival of the queens. With a backdrop of the majestic high-desert peaks of Mount Charleston and Sunrise Mountain, the Veterans and Senior Queens were joined on their rides by therapy dog Lucee Light for an incredibly special day.

Fresh from the exhilarating experience of flight, the Senior Queens then changed into their regalia of gown, sash, and crown for the Queens dinner hosted by Lake Mead Cruises. Cruising aboard a vintage paddle-wheeler in perfect weather, the cruise on Lake Mead traveled to the base of the towering Hoover Dam, specially lighted at night. With the dam as a spectacular backdrop, the Queens dined on prime rib, salmon, pasta, and an extensive variety of delicacies.

From festivities to work, interviews began on Wednesday of pageant week in the special Orleans location created specifically for the production. The venue was a magnificent set built within a 10,000 square foot convention space, but closed to the outside public to protect the health of the Senior Queens, although friends and family of the contestants were allowed to attend the show. Dressing rooms were constructed on-set, and the stage was designed to incorporate computer graphics and a 30-foot back-lit projection screen. The personal interviews were both scored for the pageant and filmed for use in future TV productions. Following Interview, a special presentation recognized the production crew, pageant photographer Gary Duffel, and concluded with the Senior Queens presented with their official pageant “Superbowl-style” rings and pins.