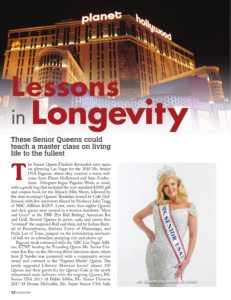 The Senior Queen Finalists descended once again on glittering Las Vegas for the 2018 Ms. Senior USA Pageant, where they received a warm wel­come from Planet Hollywood and Saxe Produc­tions. Delegates began Pageant Week, as usual, with a goody bag that included the now standard $2000 gift and coupon book for the Miracle Mile Shops, followed by the next morning’s Queens’ Breakfast hosted by Cafe Hol­lywood, with live interviews filmed by Producer John Trigg of NBC Affiliate KSNV. Later, more than eighty Queens and their guests were treated to a western hoedown “Meet and Greet” at the PBR (Pro Bull Riding) American Bar and Grill. Several Queens in gown, sash, and crown first “crowned” the sequined Bull and then, led by JoAnn Bech­tel of Pennsylvania, Barbara Travis of Mississippi, and Paula Lee of Texas, jumped on the intimidating mechani­cal bull for an adrenaline pumping ride and photo op!

The pageant finals were held in Planet Hollywood’s lux­urious SAXE Theater. The judges, Amie Jo (host of syndi­cated TV show Sizzle. Vegas), Hadi Sadjadi (an artist and actor who has appeared in several movies including Into the Night), Ninon de Vere De Rosa (President of KidsTalk Productions and host of Vegas Live with Ninon), Ellen Stokes (founder of the Miss Fabulous Las Vegas Pageant) and Gayle Anderson, who was presented with a Lifetime Achievement Award for her work in creating the Interna­tional Office of Protocol under what is now the Las Vegas Global Economic Alliance, would have the difficult task of selecting the next Ms. Senior USA.

Before announcing the new court and finalists, it should be noted that these are “Senior” women who have a com­mitment to community service and possess an infectious and enviable energy. The Senior Queens include military veterans, cancer survivors, a city mayor, doctors, attorneys, CEO’s, gymnastic and dance instructors, Olympic partici­pants, and amazing women who have raised families and supported their country through good and bad times and who seemingly traverse the country on a weekly basis. In the months leading up to the 2018 Ms. Senior USA Pag­eant, the state Queens participated in an exhaustive state application process which then produced the national final­ists. Over the months, the national state finalists joined their national reigning queens at more than fifteen nation­al and international events.