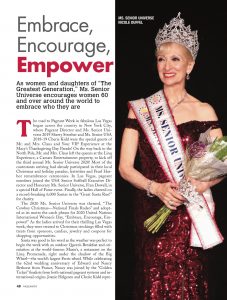 As women and daughters of “The Greatest Generation,” Ms. Senior Universe encourages women 60 and over around the world to embrace who they are

The road to Pageant Week in fabulous Las Vegas began across the country in New York City, where Pageant Director and Ms. Senior Universe 2019 Sherry Strother and Ms. Senior USA 2018-19 Cherie Kidd were the special guests of Mr. and Mrs. Claus and Your VIP Experience at the Macy’s Thanksgiving Day Parade! On the way back to the North Pole, Mr. and Mrs. Claus left the queens at the Linq Experience, a Caesars Entertainment property, to kick off the third annual Ms. Senior Universe 2020! Most of the contestants arriving had already participated in their local Christmas and holiday parades, festivities and Pearl Harbor remembrance ceremonies. In Las Vegas, pageant members joined the USA Senior Softball Executive Director and Honorary Ms. Senior Universe, Fran Dowell, in a special Hall of Fame event. Finally, the ladies cheered on a record-breaking 6,000 Santas in the “Great Santa Run!” for charity.

The 2020 Ms. Senior Universe was themed, “The Cowboy Christmas—National Finals Rodeo” and adopted as its motto the catch phrase for 2020 United Nations International Women’s Day, “Embrace, Encourage, Empower!” As the ladies arrived for their thrilling Las Vegas week, they were treated to Christmas stockings filled with treats from sponsors, candies, jewelry and coupons for shopping opportunities.

Santa was good to his word as the weather was perfect to begin the week with an outdoor Queen’s Breakfast and orientation at the world-famous Maxie’s, a restaurant on the Linq Promenade, right under the shadow of the Big Wheel—the world’s largest Ferris wheel. While celebrating the 62nd wedding anniversary of Edward and Nancy Berhorst from France, Nancy was joined by the “Golden Ticket” finalists from both national pageant systems and international origins. Joanie Helgesen and Cherie Kidd represented the Ms. Senior USA system. Peggy Fowler represented the oldest senior pageant, Ms. Senior Sweetheart of America. Nicole Duffel represented the United States system. Marilyn Kohler represented the Senior America system. Rounding out the top ten from the Cayman Islands was Celina Dilbert, from the Philippines came Estelita Paulin, from Canada came Shelley Gish, and Italy was represented by Marianne Lucchesi (Hamilton).

Breakfast was followed by a special off-site trip to the Cowboy Christmas exhibition at the Rio Hotel Convention Center and then a “Queen-ager Pajammie” party in the Hospitality Suite. Later that evening, the pageant’s very special guest, Stacey Schieffelin, arrived from London to be officially welcomed as “one of the girls!” Stacey is the founder of the YBF line of products, a QVC and HSN television star, 2019 recipient of the Global Beauty Awards Lifetime Achievement Award, and founder of Women’s Leadership LIVE, with a reach of more than 350 million women across the globe. Unknown to Stacey, her husband David had arrived earlier to surprise her for their 25th Wedding Anniversary! Founding Queen Kat Ray joined Stacey and David as they participated in a very special renewal of their vows on the Las Vegas Strip.

Day Two was jam-packed with public meet-and-greets and appearances for the Queens, beginning with a tour of Opportunity Village, a special education center which works with adults who have Cerebral Palsy, Down syndrome, etc. to help them become as self-supporting and as independent as possible. The Queens toured the facility, met with the clients and were introduced to the “Magical Forest.” The Magical Forest is the largest fundraiser for Opportunity Village. The Queens were invited back that evening for the Military and First Responder Appreciation Night to decorate a tree. “Magical” is the only word to use when viewing the displays at night. The Queens gathered children from the public to participate and posed for hundreds of photo ops.