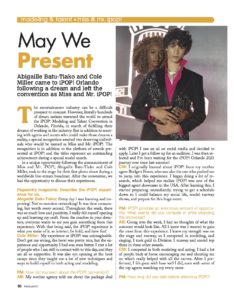 Abigaille Batu-Tiako and Cole Miller came to iPOP! Orlando following a dream and left the convention as Miss and Mr. iPOP!

The entertainment industry can be a difficult prospect to conquer. However, literally hundreds of dream seekers traversed the world to attend the iPOP! Modeling and Talent Convention in Orlando, Florida, in search of fulfilling their dreams of working in the industry. But in addition to meeting with agents and scouts who could make those dreams a reality, a special recognition awaited two deserving individuals who would be named as Miss and Mr. iPOP!. The recognition is in addition to the plethora of awards presented at iPOP! and the titles represent an outstanding achievement during a special model search.

In a unique opportunity following the announcement of Miss and Mr. iPOP!, Abigaille Batu-Tiako and Cole Miller, took to the stage for their first photo shoot during a worldwide live-stream broadcast. After the convention, we had the opportunity to discuss their experiences.

Pageantry magazine: Describe the iPOP! experience for us.

Abigaille Batu-Tiako: Every day I was learning and improving! Not to mention networking! It was time consuming, but worth every second. Throughout the week, there was so much love and positivity. I really felt myself opening up and learning my craft. From the coaches to your directors, everyone wants to see you gain something from this experience. With that being said, the iPOP! experience is what you make of it, so interact, be bold, and have fun!

Cole Miller: My experience at iPOP! was unimaginable. Don’t get me wrong, the hotel was pretty nice, but the experience and opportunity I had was even better. I met a lot of people who I am still in contact with to this day, and they are all so supportive. It was also eye opening at the boot camps since they taught me a lot of new techniques and ways to build myself in both acting and modeling.

PM: How did you learn about the iPOP! convention?

AB: My mother agency told me about the package deal with iPOP! I saw an ad on social media and decided to apply. Later I got a follow up for an audition. I was then selected and I’ve been waiting for the iPOP! Orlando 2021 journey ever since last summer!

CM: I originally learned about iPOP! from my mother agent Bridgett Foster, who was also the one who pushed me to jump into this experience. I began doing a lot of research, which helped me realize iPOP! was one of the biggest agent showcases in the USA. After learning this, I started preparing immediately, trying to get a schedule down so I could balance my social life, model runway shows, and prepare for this huge event.

PM: iPOP! provides an enormous amount of opportunity. What events did you compete in while attending the showcase?

AB: Going into the week, I had no thoughts of what the outcome would look like. All I knew was I wanted to gain the most from this experience. I knew my strength was on the stage and runway, so I competed in modeling, and singing. I took gold in Division 1 runway and scored top three in three other awards.

CM: I competed in both modeling and acting. I had a lot of people back at home encouraging me and cheering me on which really helped with all the nerves. After I preformed, I felt great with how well I did, even with some of the top agents watching my every move.