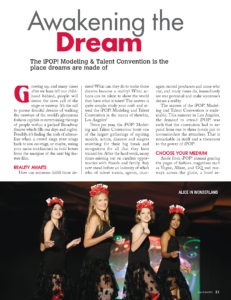 The iPOP! Modeling & Talent Convention is the place dreams are made of

Growing up, and many times after we have left our childhood behind, people will desire the siren call of the stage or runway. It’s the call to pursue fanciful dreams of walking the runways of the world’s glamorous fashion capitals or entertaining throngs of people within a packed Broadway theater which fills our days and nights. Possibly, it’s feeling the rush of adrenaline when a crowd sings your songs back to you on-stage, or maybe, seeing your name emblazoned in bold letters from the marquee of the next big feature film.

How can someone fulfill those desires? What can they do to make those dreams become a reality? What actions can be taken to show the world they have what it takes? The answer is quite simple: study your craft and attend the iPOP! Modeling and Talent Convention in the mecca of showbiz, Los Angeles! Twice per year, the iPOP! Modeling and Talent Convention hosts one of the largest gatherings of aspiring models, actors, dancers and singers searching for their big break and recognition for all that they have trained for. After the hard work, many times missing out on carefree opportunities with friends and family, they now stand before an industry of who’s who of talent scouts, agents, managers, record producers and more who can, and many times do, immediately see star potential and make someone’s dream a reality. The success of the iPOP! Modeling and Talent Convention is undeniable. This summer in Los Angeles, the demand to attend iPOP! was such that the convention had to expand from one to three hotels just to accommodate the attendees. That is remarkable in itself and a testament to the power of iPOP!.

Aside from iPOP! alumni gracing the pages of fashion magazines such as Vogue, Allure, and GQ and runways across the globe, a brief reminder of the credits we have seen onscreen will fortify iPOP! as a destination event. Their credits include Grey’s Anatomy, CSI, NCIS, Nashville, Spider Man, Avengers, X-Men, Pitch Perfect, Victoria’s Secret Fashion Show and more in an ever-expanding list. With the explosive growth of on-demand and in-house produced streaming services, more faces and voices than ever are being sought after to fill roles. In an epic announcement, American Idol was in attendance, searching for talented vocalists to possibly appear on the upcoming season!

However, iPOP! is not only about putting your best foot or voice forward. It is also a time for learning and continuing to perfect your craft. As attendees venture from runways to stages, in-depth workshops and bootcamps are provided by the very individuals who are looking for the next star. Modeling, Acting, Singing, Dancing, and What to Expect in the Industry are just a few of the bootcamps and seminars where any conventioneer or parent can learn from the best-in-the-business. The halfway point of the iPOP! Modeling and Talent convention, in addition to the daily regime, offered a respite from business with a chance to decompress and enjoy the company of other attendees and families. It was time to put on the dancing shoes and spend an evening filled with beats, flashing lights, and smiles galore at the iPOP! Dance Party. In a first, both the male and female model finalists were whisked away for a hair, makeup and photo shoot session. One male and one female model would earn the recognition of Mr. and Miss iPOP!.