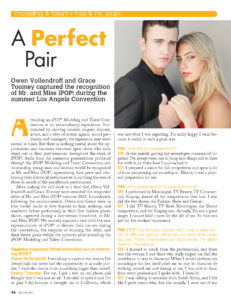 Owen Vollendroff and Grace Toomey captured the recognition of Mr. and Miss iPOP! during the summer Los Angels Convention

Attending an iPOP! Modeling and Talent Convention is an extraordinary experience. Surrounded by aspiring models, singers, dancers, actors, and a bevy of scouts, agents, record producers, and managers, the experience may seem surreal at times. But there is nothing surreal about the opportunities and successes bestowed upon those who truly stand out in their performances throughout the week of iPOP!. Aside from the numerous presentations produced through the iPOP! Modeling and Talent Convention, one outstanding young man and woman would be recognized as Mr. and Miss iPOP!, representing their peers and celebrating their historical performances in catching the eyes of those in search of the penultimate performance. After making the call-back to a final few, Owen Vollendroff and Grace Toomey were awarded the respective titles of Mr. and Miss iPOP! summer 2022. Immediately following the announcement, Owen and Grace were in true model mode as they hurried to hair, makeup, and wardrobe before performing in their first fashion photo shoot, captured during a live-stream broadcast, as Mr. and Miss iPOP!. We recently enjoyed a visit with the new representatives of iPOP! to discuss their success during the convention, the surprise of winning the titles, and their future goals within the industry after attending the iPOP! Modeling and Talent Convention.

Owen Vollendroff: I would say to capture the dreams I’ve always had, but never had the opportunity to actually pursue. I want the chance to do something bigger than myself.

Grace Toomey: For me, I got a text on my phone and thought that it was just an ad. I decided to open it and I’m so glad I did because it brought me to California, which was not what I was expecting. I’m really happy I went because it ended in such a great way.

PM: How did you prepare for it?

OV: It was mainly getting my monologue commercial together. I’ve always been one to jump into things and to have fun with it, so that’s how I approached it.

GT: I prepared a dance for the competition and spent a lot of time memorizing my monologue. Mostly, it was a physical preparation for me.

PM: What presentations did you perform in?

OV: I performed in Monologue, TV Beauty, TV Commercial, Singing, almost all the competitions they had. I also did the two shows, the Fashion Show and Grease.

GT: I did TV Beauty, TV Reel, Monologue, the Dance competition, and the Singing one. Actually, I’m not a good singer. I cannot hold a note for the life of me. So that was just for the workers’ enjoyment.

PM: iPOP! has industry experts who cover a wide variety of different genres. What did you learn that made you say, “Wow, that makes so much sense. I’m glad I went to this seminar.”

GT: I was talking to someone from South Africa, and I felt like I grew career-wise, but also socially. I went out of my comfort zone and I spoke to so many people. Putting myself out there and just being able to talk to everyone was definitely something new, but also helped me to grow.