WCoPA is a Gold Medal Winner 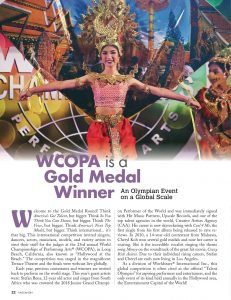 Welcome to the Gold Medal Round! Think America’s Got Talent, but bigger. Think So You Think You Can Dance, but bigger. Think The Voice, but bigger. Think America’s Next Top Model, but bigger. Think international… it’s that big. This international competition invited singers, dancers, actors, musicians, models, and variety artists to strut their stuff for the judges at the 23rd annual World Championships of Performing Arts® (WCOPA), in Long Beach, California, also known as “Hollywood at the Beach.” The competition was staged in the magnificent Terrace Theatre and the finals were webcast live globally.
Each year, previous contestants and winners are invited back to perform on the world stage. This year’s guest artists were: Stefan Benz, 12-year old actor and singer from South Africa who was crowned the 2018 Junior Grand Champion Performer of the World and was immediately signed with Hit Music Partners, Upscale Records, and one of the top talent agencies in the world, Creative Artists Agency (CAA). His career is now skyrocketing with Cool 4 Me, the first single from his first album being released to rave reviews. In 2010, a 14-year-old contestant from Malaysia, Cheryl Koh won several gold medals and now her career is soaring. She is the incredible vocalist singing the theme song Money on the soundtrack of the great hit movie, Crazy Rich Asians. Due to their individual rising careers, Stefan and Cheryl are each now living in Los Angeles.

As a division of Worldstars® International Inc., this global competition is often cited as the official “Talent Olympics” for aspiring performers and entertainers, and the only event of its kind held annually in the Hollywood area, the Entertainment Capital of the World!

“Contestants this year were vying for the gold PLUS prizes, cash and a total of half a million dollars in scholarships,” says Griff O’Neil, WCOPA Founder/CEO and a former executive of the Miss Universe Pageant, adding, “our mission is finding and discovering the treasure trove of talent crossing several continents.” To help process the talent, the veteran entertainment producer licensed seventy-five Scouts and National Directors who scoured the globe for potential talent. Selections for official contestants were held in the United States, Canada, the Caribbean, Central and South America, Europe, Asia and Africa. Thousands of people around the world applied to participate in WCOPA 2019.

There are six categories of competition: dancing, singing, modeling, acting, instrumental and variety arts (Juniors, ages 15 and under; Seniors, ages 16 and over; Solos and Groups). Each act is allowed one minute to showcase their skills. There are preliminary and semifinal rounds of elimination which ultimately determine the finalists competing during the thrilling final night showcase, which leads to the selection and announcement of the world medal winners.

Throughout the exciting week, over a hundred judges from the entertainment industry were involved before the main prizes were awarded. Gold, silver and bronze medals, official World Champion trophies and plaques, recording contracts and scholarships were all given away to the winning contestants. Finally, the top prize of all, the coveted titles 2019 Junior and Senior Grand Champion Performers of the World were handed out to the winners.

However, every contestant is considered a “Worldstar Winner” since the networking opportunities are inestimable, the competition experiences are beyond belief, the industry informational seminars are invaluable, and the friendships made with talent throughout the world are priceless!

With shows like The Voice and So You Think You Can Dance contending for airtime on TV, it’s no wonder there’s such a proliferation of talent looking for a home. These talent shows score some of the biggest audience ratings and their renewed popularity has made WCOPA more relevant than ever.

“Each year the talent is more amazing than the years prior. This year, every contestant came ready, not just to compete, but to take a serious shot at the Grand Champion titles, which made the level and spectrum of talent at an all-time high,” states Gwen Wilson, WCOPA President.

Occurring each year after the orientation process is the Team Show Night, where teams from various countries put together fun routines for all attendees to enjoy and watch. Winners of this year’s team competition were: 1st place Team Philippines; 2nd place Team Germany; 3rd place Team Trinidad and Tobago.

Launching the nine-day exciting world competition every year is the highly-anticipated Worldstars® Boot Camp. This event is an unmatched phenomenon of educational seminars and workshops held by industry experts in the fields of music, dancing, acting and modeling.

A popular highlight of the festivities is the spectacular Opening Ceremonies, featuring a colorful Parade of Nations in which official delegates in specially designed apparel proudly represent the customs and heritage of their respective countries. Winners of the Best National Costume Award were: 1st place Thailand; 2nd place Philippines; and 3rd place Republic of Georgia, with an Honorable Mention to the delegates of Romania.

Because of its stellar reputation in attracting talent and models from over 60 countries, esteemed VIP and celebrity entertainment industry greats from Hollywood, Las Vegas, Nashville and New York have served as judges and have been honored with an induction into the Performing Arts Hall of Fame® at this prestigious global competition.

This year’s 2019 honoree was Anita Mann, recognized by the Academy of Television Arts and Sciences as one of America’s top five contemporary choreographers, and recipient of an Emmy with four other nominations. Her countless credits include The Academy Awards, The Golden Globe Awards, Academy of Country Music Awards, Miss America Pageant, The People’s Choice Awards, The Emmys and many others.

Some of the previous judges have included: Mehcad Brooks, who starred on Alan Ball’s HBO hit TV series True Blood. He is a SAG ensemble award winner and Image Award nominee for his performance as Alfre Woodard’s son on ABC’s smash TV series Desperate Housewives and currently stars in CW’s Supergirl. Amy Morgan is a celebrated professional dancer and choreographer who is signed with MSA Agency in Los Angeles, California, and teaches at Millennium Dance Complex, Debbie Reynolds Legacy Studio and the International Dance Academy. She performed with Beyoncé at The Billboard Awards and MTV Music Video Awards. Pierre Parisien, formerly the Artistic Director of Cirque du Soleil Special Projects and Touring Shows in Montreal, is currently Senior Director of the Cirque Du Soleil resident shows in Las Vegas and also works establishing Cirque shows in China. John Pardee and Joey Murphy, in addition to their careers as successful feature film screenwriters, they are in their 20th year as writers/producers of numerous television series—most notably, The Jeff Foxworthy Show, Cybill and ABC television’s mega-hit, Desperate Housewives. Kristina Aglinz, was a multi-medalist winner at WCOPA 1998, and who is now considered Russia’s #1 jazz singer, an award winning pianist, singer, composer and creator as well as Artistic Director of the Musical Festival Ultra Muzika. Crista Klayman, is associated with LA Models and considered the number one runway agent in America. Crista has developed and marketed top models to such exclusive clients as Gucci, Christian Dior, Chanel, and Louis Vuitton to name a few. Currently, she hosts her own radio show, The Real Runway with Crista Klayman. Steve Dorff, one of the world’s most acclaimed music composers with successes such as NSAI Songwriter of the Year, 40 BMI awards and 11 Billboard #1 awards, three Grammy nominations, Emmy nominations for five television compositions, nine #1 film songs and 15 Top 10 hits. His many songs have been sung by some of the greatest artists of our time: Barbra Streisand, Celine Dion, Whitney Houston, George Strait, Vanessa Williams and countless others. He currently has two projects making their way to Broadway.

Another prized opportunity and unique experience at WCOPA are the go-sees, whereby each contestant can selectively meet one-on-one with managers, agents, producers and other key personnel from the entertainment industry.

Concluding the thrilling week of activities was the World Championships of Performing Arts Awards Ceremony, in which the announcement of the winners and the presentation of medals, plaques and trophies along with scholarships were given. Later that evening, the contestants danced the night away with a joyous Celebration Party commemorating the winners and everyone in attendance.

After all is said and done, talent competitions are nothing new. Everyone from Frank Sinatra, to Patsy Cline, to Britney Spears have been discovered through talent contests. Talent contest judges initially rejected such well-known stars and icons like Elvis Presley, Buddy Holly and Drew Carey. The genre has been around on radio and later on TV for over 70 years, but the World Championships of Performing Arts is by far one of the biggest in scale and scope, and seeks to turn the international corridor between a country’s artists and dreamers and Hollywood’s “Land of Dreams” into a mutually beneficial two-way street and launch pad for opportunity, recognition and reward.

With the international medals awarded, the stage lights dimmed, and the music silenced, the national and international delegates and teams returned home with newly acquired industry knowledge, stage presence, performance experience, and industry contacts (and several new discoveries). These contestants were happy in their realization the World Championships of Performing Arts had provided them with an unparalleled opportunity to showcase their talents on an international stage. Now, one very important question remained… Will we see you next year on the medal podium for the 24th annual World Championships of Performing Arts at Disneyland in Anaheim, California U.S.A.?