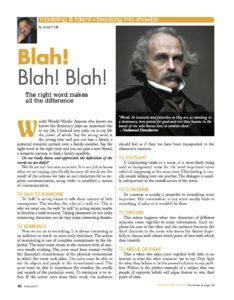 Words! Words! Words! Anyone who knows me knows the dictionary plays an important role in my life. I learned very early on in my life the power of words. Say the wrong word at the wrong time and you can lose a friend, a potential romantic partner, even a family member. Say the right word at the right time and you can gain a new friend, a romantic partner, or heal a family squabble.

Do we really know and appreciate the definition of the words we use daily?

Words are our business as actors. It is our job to know what we are saying, specifically because all words are the result of the actions we take as our characters let us explore communication, using verbs to establish a means of communication.

To talk to someone

Now we are on to something. It is always interesting as an audience to watch an actor truly reminisce. The action of reminiscing is one of complete commitment to the objective. The actor must return to the moment with all sensory recalls working. The actor must have created vividly the character’s remembrance of the physical environment in which the event took place. The actor must be able to see the objects and people in the remembered event. The actor must be able to experience the weather, the smells and sounds of the particular event. To reminisce is to relive. If the actors have done their work, the audience should feel as if they too have been transported to the character’s memory.

If chitchatting exists in a scene, it is most likely being used as background noise for the more important scene which is happening at the same time. Chitchatting is usually people talking over one another. The dialogue is usually unimportant to the overall action of the scene.

To converse is usually a preamble to something more important. Idle conversation in any scene usually leads to something of value or it wouldn’t be there.

This action happens when two characters of different opinions come together to trade information. Each explains his case to the other and the audience becomes the third character in the scene who leaves the theatre hopefully to discuss with others which point of view with which they identify.

To Argue or Fight

This is when two sides come together with little or no interest in what the other character has to say. They fight for what they believe to be the answer/solution to any problem. Politics is the perfect example of a subject that two people of opposite beliefs will argue forever to win their point of view.

Some actors like the verb to inform. To me, inform is just another way of saying to teach. Use whichever word makes you happy as long as you are specific with the meaning. I am constantly being made aware of how frequently characters are involved in the action of teaching.

To Reveal or Expose

To reveal or expose something deeply personal. A secret or information about oneself or someone important to that person which may have repercussions.

To theorize on a higher level of thought. To express yourself with the thoughts and ideals of the great thinkers of the past. To deliberate with oneself in private.

As you may have noticed, all the above words are some form of the act of communication between two people. I could very easily say in every scenario I’ve created, the action or objective I was using was, “to talk.” As you can see “to talk” takes many different avenues of expression.

My example also pertains to other actions and objectives as well. For example, here is a list of verbs meaning to be more than fond of someone:

To be crazy about

To be mad for

To be nuts for

You can see there is more than one way to say I love you. Each individual word has something specific about it which makes it different from the next word.

Returning to our first selection of verbs, google Tom’s last monologue from the Glass Menagerie. I would love to print it here for you, but copyright laws prohibit printing it here. However, it is readily available on Google. I want you to notice how Tom begins simply telling his story and soon gets caught up in reminiscing, which is reliving what he did. He does so to the point of almost desperation as he tells Laura to blow out her candles. Once she does as he asked, he’s able to return to the present where he says goodnight to his audience.

You can do the same with Blanche’s beautiful, yet terrifying monologue from A Streetcar Named Desire which begins, “He was a boy just a boy.” The difference from Tom’s monologue is she is reminiscing even before she begins speaking. See how the monologue builds until she relives the gunshot and what occurs after.

You may choose to say Hamlet is philosophizing in his “To Be or Not to Be” soliloquy or you may choose a different verb that more suits your interpretation.

The list of verbs I have used here are what I choose to call beginning verbs. When working on a character, once I know what I am doing, what my goals are, I can dig deeper into my character and his situation and define a much more specific verb of action for my character.

This article is designed for all actors, young and seasoned, to appreciate the subtle differences in words which enable us to be better actors.

A final note, some of what I stated here can be read in my original acting teacher Stella Adler’s wonderful book, The Technique of Acting. It is the perfect book to add to your acting library.

Stay healthy in these troubled times. Please wear a mask, if not for yourself, for the ones you love. Oh, and wash your hands.